Back in my London days, the late-night kebab used to be a staple. On the way home from the pub, or after a night out, there was a kebab shop just around the corner from Tulse Hill train station, and I was a regular there for a doner with chili sauce. Glad I hadn’t seen this movie, which will do for the doner what Jaws did for ocean swimming.

Mind you, I’ve rarely seen a film run out of steam so suddenly. This starts off really well, with a grimly hellish – yet, likely, accurate – portrayal of binge drinking culture in a British seaside town. There, Salah (Abaza) comes home from his political studies course to help his Dad run the local kebab shop, which is plagued by drunken assholes. During an altercation with one such group, Dad is killed, and the local cops are largely disinterested. Salah tries to keep things going, but the debts accumulate, until another unfortunate accident leaves him with a corpse in need of disposal. What’s a hard-up, kebab shop owner to do? 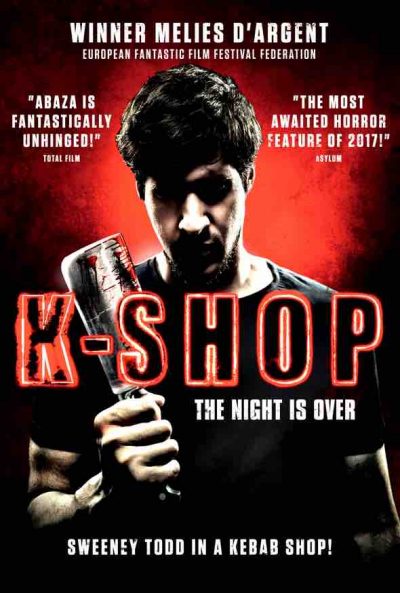 Yeah, it’s not difficult to figure out.

This modern-day updating of Sweeney Todd – writer-director Pringle directly referenced it in his Kickstarter campaign – has a lot of potential. There’s sleazy reality star Jason Brown (Williams), intent on opening ever bigger, brasher drink emporia, who stands in stark contrast to our “hero”. For Salah is the very antithesis of what you’d expect: a well-educated, mild-mannered young man, appalled at what he sees around him. The movie seems to feel he’s performing a service to society, by turning all these wastes of space into delicious late-night snacks. Hard to argue, in some ways, when you watch the footage of inebriated low-lives with which this is peppered.

But then the film inexplicably leaps six years forward – not that Salah appears to have aged a day – and all momentum is lost, while the viewer wonders what the hell went on in the intervening time. The script flails around for a bit, trying to recapture its energy, by bringing in new characters, like local hotel manager Sarah (Atherton) or apprentice kebabber Malik (Noi). It doesn’t work, and the two-hour running time feels increasingly like a terrible mistake as well: the second is much more filler than killer, like a late-night doner which turns out to be all salad and no meat. Eventually, you get to where you know it’s been heading, all along, and even this is a bit underwhelming.

It’s a shame, since the first half is a darkly comic hoot, skewering both the laddish boozing (carried out by both sexes), and the tacit compliance of those who cater to it – in forms both literal and metaphorical. If the script had continued with these aspects of social satire (which you could argue were there in Sweeney Todd as well), I’d have been much happier, but it doesn’t seem as if Pringle could figure out where the script should go. The end result doesn’t do justice to some good performances, led by Abaza’s engaging portrayal of someone who’d rather be doing anything, other than running a kebab shop.