Basically stealing from a lot of (generally better) movies, both old and new – The Warriors and Battle Royale from the former category, through to The Purge and The Hunger Games – this doesn’t do enough to merit its own existence.  The simple-minded pro-immigration philosophy offered will convince no-one of anything, and the action offered, while competent, is undistinguished enough to elevate it otherwise. 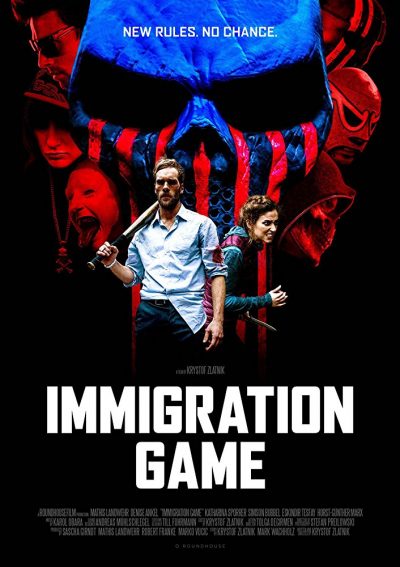 In a slightly-future Germany, immigration has to be limited. The chosen method – for reasons that are never satisfactorily explained – is to dump the immigrants on the outskirts of Berlin. Those that make it to the iconic Fernsehturm in the middle will get residency permits. The catch being, of course, that on their way there, they are free targets for gangs of hunters, with the whole thing being televised. Thrown into this is Joe (Landwehr), who accidentally kills a hunter when trying to help a refugee: as an alternative to prison, he’s given the option of taking part in the game, as one of the hunters. After being saved by Syrian refugee, Faizah (Ankel), the pair team up. But they’re still seriously outnumbered by the pursuers – and not all those who profess to be friendly, actually are.

The obvious potential for media satire here is almost entirely unexplored. There is a final segment, which goes full-blown Hunger Games; though to be honest, this doesn’t work at all, and comes over as a poorly-conceived “Gotcha”. So it’s perhaps for the best they didn’t attempt this kind of thing elsewhere. I’m just curious about the logistics of it all. Berlin’s a big city, yet the dozen or so hunters (this is at the lower end of the budget spectrum, to be clear) don’t appear to have difficulty tracking down their targets without any outside aid – at least, when necessary to the plot.

For a low-budget urban chase flick, it’s not badly assembled, although the reliance on shaky-cam footage is as annoying as ever. It does give the violence an “up close and personal” feel that’s visceral and effective enough. The different gangs are a nice idea too, although these seem to lack particular themes: if you can’t come up with some decent ideas there, you’re not trying very hard, and the blandness on view is a bit disappointing. Imagination costs nothing, and that’s probably the main problem here.

As is, the thought put into this appears to have begun and ended with the basic concept, and that isn’t nearly enough on which to hang a movie. It’s where this fails, even putting aside the questionable and never questioned politics (if you don’t stop in the first safe territory you come to, you’re no longer a refugee – you’re an economic migrant using strife as an excuse). The other movies name-checked above succeeded, because they built on their ideas, taking them to the appropriate conclusions. This just drops a single, admittedly interesting, what-if into modern society: while necessary for reasons of budget, it still means the results are limited in their effect.