I have never played the video-game on which this was based, but by chance caught an early sequence and thought it looked interesting enough to be worth a shot.

I’m sure it’s a fairly faithful recreation of the game – literally half of it feels like a cut scene, zooming pointlessly through some or other location filled with smoke, haze or other particulates (as shown above). It just goes to prove that video-game and movies are different media, and what works in one absolutely does not necessarily work in the other. The plot… Well, video-games generally have their stories about as well thought-out as Bang Bus Backdoor Bimbos Volume 17, and this is no exception. 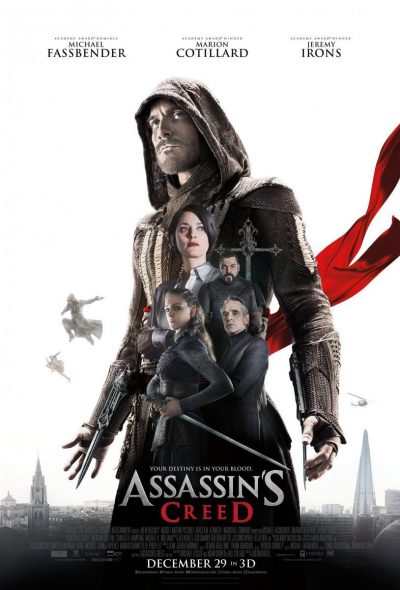 There are two groups, the Assassins and the Knights Templar, who have been warring for centuries to gain possession of the Apple of Eden. The Templars want to use this to eliminate free will, which they say is the cause of mankind’s ills, such as violence. Cal Lynch (Fassbender) is a descendant of Aguilar de Nerha, the last person known to have owned it. He gets Nikita‘d out of jail by the Abstergo Foundation – really, who makes up these names? – so lead boffin Dr. Sofia Rikkin (Cotillard) can plug him into her machine. This will pull out Aguilar’s genetic memory from Cal, letting the Abstergonads and their leader, Alan Rikkin (Irons), locate the Apple. Step 3: PROFIT.

The film bounces back and forth between the modern day, and the 15th century Andalusia home of Aguilar, with his experiences and skills gradually “bleeding” into Cal, until he ends up embracing his inner Assassin. He then rebels, escaping the facility to ensure the Templars don’t get their hands on the prize. Yet, somehow, it all manages to be far less exciting than it sounds. Oh, this is not short on its volume of action, to be sure. However, it’s all so blatantly generated, manipulated and enhanced by CPU, that even the genuine stunts, like the 125-foot “Leap of Faith”, are robbed of virtually all impact.

The performances aren’t much better. Irons, in particular, phones in his performance to such a degree, I’m convinced he was entirely CGI [the skin on his face seems impossibly smooth]. I mean these aren’t bad actors: Fassbender, Irons, Cotillard and Gleeson (who plays Cal’s father) have all been perfectly decent to very good in other films. Here, they are just… here. In tone and content, it sits between Equilibrium and The Matrix, yet without the style or sense of awesome which elevated those two films.

Maybe it works better if you have played the video-games? That’s a possible excuse, yet if that’s the audience you’re limiting yourself too, it’s a problem, in the same vein as, “You really need to have read the books.” The entire Assassin’s Creed franchise has only sold 100 million copies, and I’m betting those weren’t to 100 million different people, not enough of a market. File this one in the ever-increasing pile of underwhelming efforts to translate games to the screen.