I was going to tack on “a.k.a. The SeaThing” to the above, but figured that one jokey reference was enough. It’s not inaccurate though. In this film’s defence, almost any film where a small group of people in a remote location, get menaced by a monster which can come from within, is going to get compared to Carpenter’s movie. And probably not in their favour. In this case, our destination is an Irish fishing trawler, on which marine biologist Siobhán (Corfield) has become a somewhat reluctant passenger (she doesn’t “do people”). Despite coastguard warnings, they stray into an exclusion zone in search of a big catch, only to find themselves snared by… something. It’s large, and appears to be keen on injecting slime into the boat. This turns out to be its method of reproduction, with the slime containing its parasitic eggs. These are delighted to find a new host. For as we all know, man is the warmest place to hide… 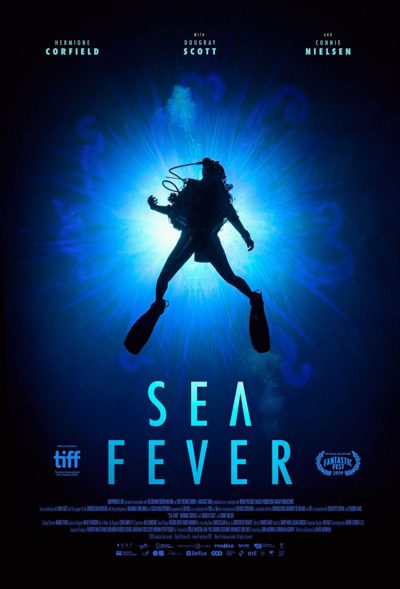 Yeah, it’s all rather too unsubtle in the debt which it owes. That’s especially true towards the latter stages, when we get a “testing for infection” scene. This could hardly be a limper imitation of an all-time classic, if it had been based on a third-hand description, pushed through Google Translate. The ending, in which the last two survivors push off in a boat, also had me rolling my eyes, though it did at least have the grace to deliver some new spin. You should probably be able to spot other similarities along the way, such as the sequence where they go to visit some colleagues in the fish acquisition business, only to find that ship is eerily deserted of life.

Until that point, it has been underwhelming, despite a couple of moments of eye violence (above) – for the parasites seem particularly to like that exit from their meat hotels. This is the least well-lit ship in boating history; I’ve seen better illuminated cave complexes. Hardiman seems to think that turning down the lights is all that needs done to generate tension, and she’s sadly mistaken there. I will say that the creature is a creepy one, with a well thought-out life-cycle, and some interesting quirks in how it behaves, which helps to keep the story-line moving forward. Indeed, the beast itself changes over the course of proceedings, presenting a developing range of threats.

It’s rarely a good thing when your monster has a better character arc than any of the human players. Also in the supporting cast are Dougray Scott and Connie Nielsen, playing the gruff husband and wife owners of the trawler, though their impact isn’t much more than anyone else. The film seems to be getting read as some kind of parable for COVID-19, with its solemn discussion of the need to self-quarantine for the greater good. However, lucking into timeliness isn’t enough to salvage what’s actually kind dull, as monstrous pandemics go.