“He has a good brain and excellent eyes. I won’t tell you where I got them, but I assure you they are perfect.” Only Peter Cushing could manage to deliver that line – which appears to have strayed in from Young Frankenstein – with perfect comic timing, yet also make work the Baron’s mournful plea, “Why can’t they leave me alone? Why can’t they ever leave me alone?” Despite this evidence of Cushing’s immaculate range, the film itself is a disappointment. Most of it takes place in and around Karlstaad, a town from where the Baron was driven previously. He returns there, having also being dispatched from another town, because he hopes to sell his possessions and regroup, only to find they were “confiscated” by local authorities. Although he locates his creation, frozen in a nearby glacier and opts to set up shop again, the brain remains inanimate. He recruits hypnotist Professor Zoltan (Woodthorpe), to re-activate the monster’s brain, but his new accomplice decides to use it for his own, less academic purposes, of robbery and revenge.

While Cushing is, as noted, his usual fine self, the rest of the film isn’t up to the same standard. There’s too much concentration during the first-half on the mechanics of the re-animation, Frankenstein and his sidekick, Hans (Elès), running about their laboratory, flipping switches. Then, it diverts later into the hijacking of the monster by Zoltan, which is not really very interesting either. The script basically throws out the window all the events of the previous Frankenstein Hammers, and the make-up job looks like Boris Karloff undergoing a poorly-executed facial [not the only aspect so borrowed, which may be connected to the then-close ties between Hammer and Universal]. Truth be told, there is precious little “evil of Frankenstein” to be seen here – it’s clearly Zoltan who is the bad guy, and he’s not an adequate focus. Frankenstein is largely relegated to the sidelines until the ending, which must have disappointed the torch-wielding mob as much as it disappointed me. Possibly the weakest of Hammer’s Frankenstein efforts. 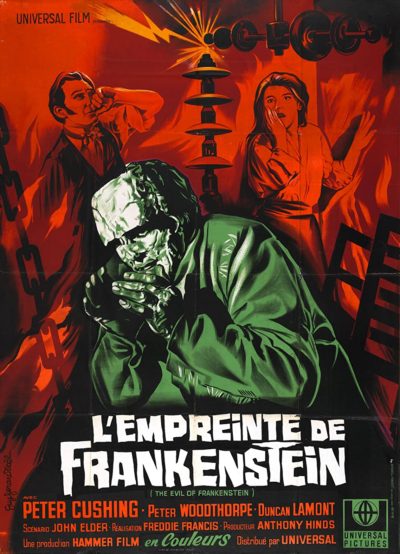 Yeah, this hasn’t improved with age, and I concur overall with the final sentence of my previous review. What worked about the previous entries in the series has largely been discarded, and that’s a shame, as those were the elements which made it fresh and interesting. In particular, there had been Cushing’s rich and complex portrayal of the Baron, which became the depiction of the character. Here, the Baron almost becomes a supporting character in his own movie, discarded in favour of something which feels more like a mockbuster version of some of the later Universal horrors. Abbott and Costello don’t quite turn up. Yet there are points where I would not have been too surprised, if they had.

There’s not really a lot of logic on view here, either from Zoltan, or even the Baron. The former seems content to give “his” creature vague instructions, even after it has already become clear that this is a simple monster, with no grasp of nuance. Telling the equivalent of a chimpanzee, “They are bad men. They must be punished,” is already so open to interpretation, it’s asking for trouble. Trying to follow up with, “You must do it quietly, carefully and not be seen…” Not. Going. To happen. Is anyone really surprised when, not two minutes later, the creature is crashing through the window of the Burgomaster’s bedroom, failing to be quiet or careful, and most definitely being seen as well?

Frankenstein, as well, makes some questionable decision, beginning with a temper tantrum when recognizes one of his rings on the Burgomaster’s hand. It’s an emotional outburst which doesn’t fit the cold, calculating scientist we’ve seen to this point. Then, after being chased out of town, he is initially hiding out in a cave, reasoning that his old chateau is out of bounds, because “the police will be there before we could reach it.” However, what happens immediately after his deep-frozen creature is found in the mountain glacier? According to the Baron, “We must get him back!” When Hans asks, “Back where?”, Victor replies, “To the chateau, of course. Where else can l work?” Good job the police are nowhere to be found, and fail to notice the return of life there. 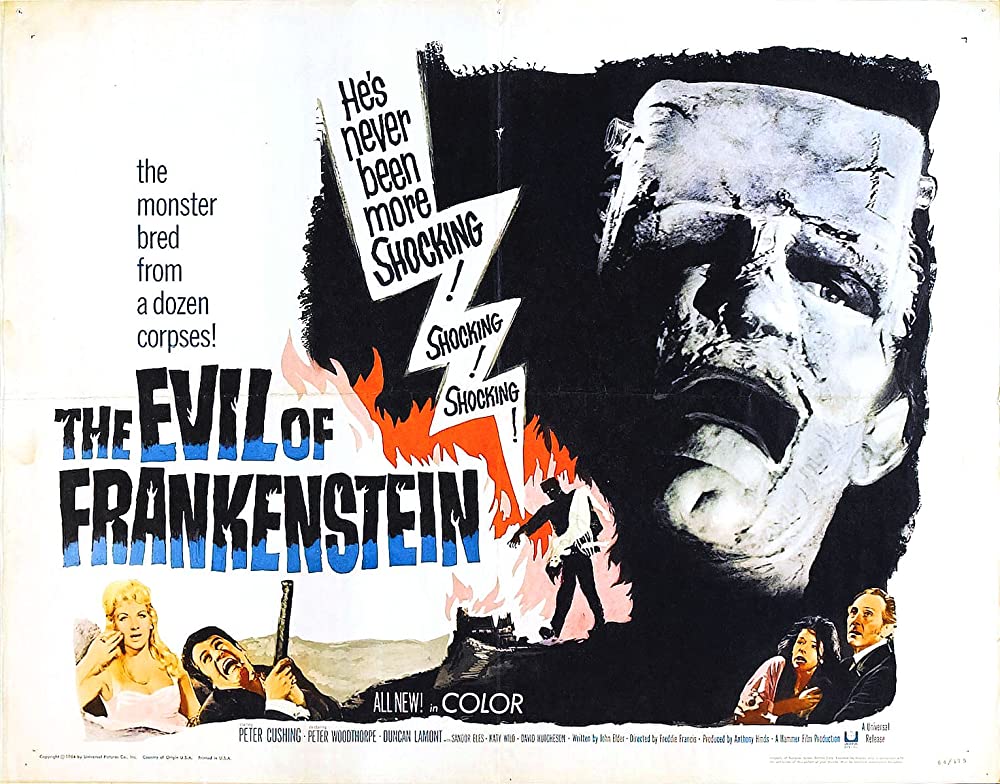 There are a couple of elements which I did like. Wild, as a mute beggar-girl, comes over as a cross between early Kate Bush and Manon Des Sources, bouncing over the rural landscape as if searching for Heathcliff. Or a lost bit of livestock. However, poor Kiwi Kingston, a wrestler from New Zealand, is entirely buried beneath copious quantities of papier mache, and demonstrates only how good Christopher Lee was when playing the monster. There’s basically next to no emotion detectable here, and especially in the early stages, the film seems more interested in the mechanical process by which the Baron works. It’s almost a “Frankenstein procedural”, in love with the elaborate laboratory sets, and forgetting to bring any humanity to the proceedings.

The most ludicrous part is likely the end, where the monster basically gets drunk and goes on a destructive bender, though the final explosion is likely one of Hammer’s more impressive model effects. It has to be this way, with Zoltan – the closest the film can offer to a real antagonist, though he’s more of a creepy huckster – having clumsily met his match previously. Francis, taking over as director from Terence Fisher. does make most of it look pretty good, but Anthony Hinds’ screenplay seems quickly dashed off. Which is odd, considering that six years had passed since the previous installment, so you’d think they’d have had plenty of time to come up with a half-decent script. Apparently not. I’m just glad this didn’t mark the death knell for the series, as it could well have done.