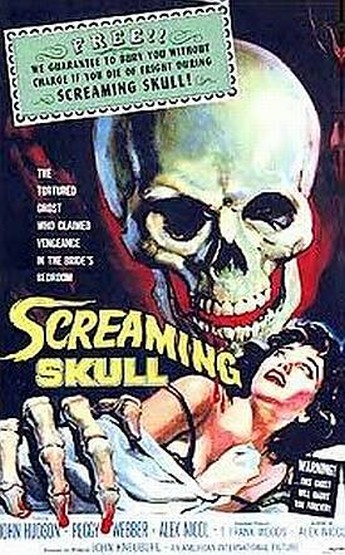 You have to admire any film that starts with a shot of a coffin that opens, revealing a sign saying “Reserved for YOU…”, as a voice-over promises a free funeral to anyone who dies of fright while watching the movie. I really doubt they had to pay out, but for a film with one location and a tiny cast, it remains not unwatchable. Eric (Hudson) takes emotionally-fragile, rich, second wife Jenni (Webber) back home, and keeps going on about first wife Marion, who suffered an “accident”. Inevitably, Jenni soon starts to have nightmares: is Marion’s spirit still around, or is Jenni going mad? Or is she perhaps being driven that way – and if so, who is responsible?

Three guesses there – and since there’s only four other people in the cast (including the director, who doubles as a retard gardener), it shouldn’t be hard. Webber certainly has a decent set of lungs on her, and the cast are about as effective as they are allowed to be, given it was Nicol’s first time behind the camera, and the script lurches along like a Yugo missing second gear. There is one remarkably cool moment though, where Jenni sees a skull, but another character says there’s nothing there – even though there is. This kicked off all manner of speculation about how long you could stay sane under relentless external pressure; truth be told, this side-line was rather more interesting than the movie’s climax…