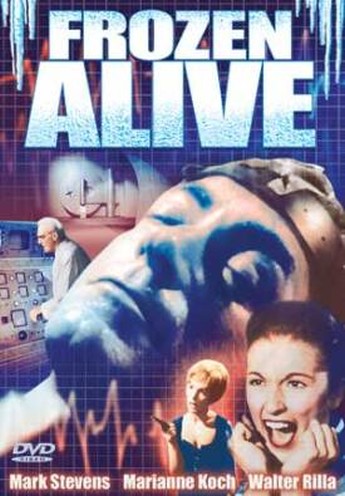 I think a quiet word needs to be had with the distributors over the meaning of the words, since even the broadest definition would cough up a hairball at the claim that this is a ‘cult classic’ – any such cult must hold its meetings in a telephone booth. It’s mostly a melodrama: Frank Overton (Stevens) is a scientist conducting experiments in cryogenics, who has a shrewish, unfaithful and alcoholic wife (Lawrence), and a sympathetic lab assistant (Koch, best known for A Fistful of Dollars). When his wife is found shot dead, Overton has been frozen as part of an experiment. Can he be revived to assist the police with their enquiries?

Spoiler alert! That’s it. The last quarter is solely concerned with his slow resuscitation, and the film then ends, certainly ranking among the worst finishes I’ve ever seen. End spoiler. An Anglo-German co-production, it comes across as contrived, but the actors are solid; it’s the script that seems to have had no thought put into it. The problem may be that, this version appears to run about twenty minutes short, so who knows what has been cut; few films could lose 25% of their running time without pain. However, here, we’re not concerned with what might be, just what is – and that’s something tame, lacking in imagination, and not worthy of serious attention.