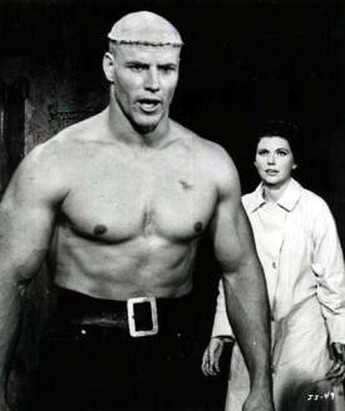 Ideally seen on a double-bill with Beaudine’s Billy the Kid versus Dracula, this entertainingly-bad B-movie is probably partly why horror-Westerns are rare. When James’ sidekick (Cal Bolder) is shot, the nearest doctor happens to be Miss Frankenstein (Onyx), though contrary to the title, she’s a grand-daughter of the monster-maker – here referred to as “Count”, not “Baron”. She’s delighted to have the sidekick, seeing him as fodder for experiments which even her brother (Geray) has qualms about. Meanwhile, local senorita Juanita (Rodriguez) has set her cap at James (Lupton), despite appearing to possess precisely one set of clothes.

This is fabulously awful; the acting runs the gamut from Onyx, who chews scenery with the vigour of a wood-chipper, through the half-decent Lupton, to Rodriguez, who redefines “bad” in a way only English-as-a-second-language actors can. [Admittedly, I doubt my dramatic talents in the Spanish language would come over any better.] There is lots to entertain here; the elegant Rasta colour scheme of the helmet used by Miss F. to make her monsters; the scarring on the head of “Igor”, which resembles a strip of Play-Doh. Jaw-dropping lines like, “Don’t do it, Maria! You are going too far – no-one should tamper with the laws of God!” The fun here just never stops: beer and mocking tone sold separately.