Though it’s hard to be sure, what we have here is certainly among the first ever Uzbekistani action movies. The region has made films before, of course, going all the way back to 1925’s intriguingly named The Minaret of Death. But since becoming independent in 1991, it seems the output was more typically dramas, and intended only for internal consumption. At the time this was made, Uzbekistan still hadn’t even submitted any films to the Oscars. Yet given this, Scorpion is surprisingly accessible and fairly competent, speaking the language of the genre reasonably well for a novice. Oh, it’s no classic. Yet it at least seems to be the case that you can get decent value for your Uzbek sum (the local currency, trivia fans).

The hero is Timur Saliev (Makhmudov), an agent for the Uzbek special services. They have been tasked with countering the actions of Scorpion, a terrorist group which has been carrying out attacks on oil company executives around the world. Two of the three leaders of the group have been identified: amusingly, they seem to be named after characters from Home Alone and Basic Instinct. The third is known only as “Johnny”. Except Timur recognizes the terrorist: it’s his long-lost brother, Jakhangir (Rasulov), previously considered dead. He decides to go AWOL, hoping to get to Jakhangir before the authorities do. It’s a mission which will take him first to Morocco, then to the neighbouring (and fictitious) state of “Kalistan”. 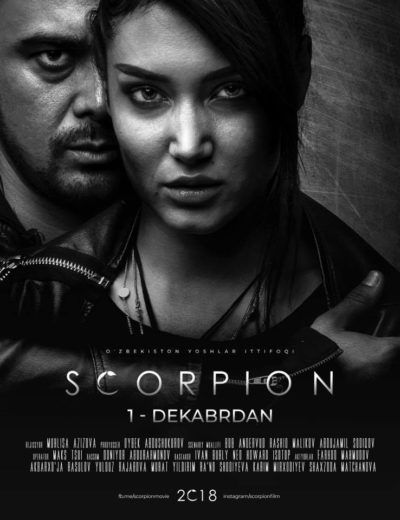 In some ways, this is just your usual globe-trotting spy/terrorist film, crossed with the not uncommon plot line of two brothers, on opposite sides of the law. Yet there is just enough this does differently, to keep the viewer marginally off-balance. For instance, it begins with Timur’s recruitment, three years earlier, when he was talented but drowning his sorrows over the loss of his brother. I kept expecting this alcoholism to show up again. It doesn’t. The other element that zigs when it feels as if a conventional movie might zag, is the ending. Scorpion are all in place, ready to carry out an attack. However, the Uzbek special ops are also there, and it appears, there ain’t no sniper like an Uzbek sniper. Without spoilers, it’s bleak, yet feels not inappropriate.

If the individual elements are fine, the movie fails to make them mesh into anything more than the sum of the parts. It holds back too much about the reasons behind Jakhangir’s disappearance, and in its absence, has little to offer emotionally. The supporting cast, beyond the two brothers, are largely pointless. For instance, there is a woman whom Timur encounters in Morocco. It feels like she should be a romantic interest, yet the angle fizzles out completely, and she’s just discarded. Maybe these are elements which will improve with practice. At least they seem to have the tech down, the film looking good for its roughly 55 billion sum budget. Which isn’t as much as it seems, being 5 million of your Americanski dollarski.