On its surface, this is a straightforward home invasion flick. Drug addict Casey (Riordan) and his newly-pregnant wife Annabelle (Vene) break into what they believe to be an empty house, only to find its owner’s daughter, Juliette (Henesey), and her husband have popped in. What should have been a simple burglary rapidly goes south, and the more Casey tries to cover up the mess, the worse things become. This leads to much of the film being him dragging an increasingly reluctant Annabelle around the house and grounds, as Casey tries to dispose of the witnesses and avoid going back to jail. Complicating matters: his father (Roberts) works on the estate, and shows up unexpectedly: I guess that makes a total of three “surprise visits” for the price of one?

The writers do try and make the obvious villains of the piece at least somewhat sympathetic, contrasting their poverty-stricken existence (they live in a trailer underneath a highway overpass) with the easy life of Juliette. Though I’d not say these efforts are particularly successful. Casey is depicted as being pushed into crime as a last resort, after his efforts to find a job and support his impending family have failed. However, the sum total of said efforts is asking his Dad for a position, so it’s really more of a token gesture than real industry. His reaching for the crack pipe any time things don’t go his way, undoes any positive feelings towards him: put it this way, I wouldn’t employ him either. 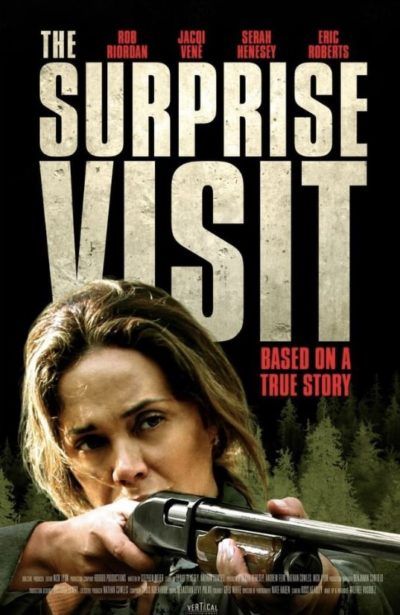 Annabelle is, at least, depicted as having something of a moral compass, to the point where you wonder why she’s with her other half. Vene seems on occasion to be channeling the spirit of Anna Nicole Smith in her performance, albeit not necessarily inappropriately. Character work aside, this is driven by the home invasion angle, and it is an interesting twist to have the invaders not exactly the sharpest tools in the box, frequently approaching bungling incompetence. There is too much roaming around the estate: I don’t know how many steps Juliette racks up on her FitBit over the course of the movie, but I suspect she easily hit her goal for the day.

The viewer, on the other hand, may well be hard pushed to stay interested, since there’s not enough background given to make you care much about her fate. Juliette is obviously portrayed as privileged, so for the film to try and turn her into some kind of heroic Final Girl feels a bit off-kilter. Especially when, at the end, it pulls a further reversal, ending in one of the most unnecessary “Three years later” epilogues I’ve seen. Supposedly based on a true story – we’ll take the caveats about that as read – I’m not certain what messages the movie is actually sending, because crime both does and does not pay here. The crucial factor seems to be whether or not you’re high. Just say no to doing crime on drugs, kids…