* No actual schoolgirls were harmed, or indeed chained, in the making of this motion picture.

Something for everyone here, or at least something to offend everyone. This seventies horror borrows mostly from Psycho, but there are aspects which seem perhaps to have had an influence on The Texas Chainsaw Massacre, released the following year. In particular, the concept of a family of psychos, living in a remote house and predating the roads nearby. Maybe I’m stretching. For it’s mostly Psycho, with siblings Frank (Kent) and John (Stoglin) Barrows severely under the thumb of their mommy issues, who rules the house from her attic room. 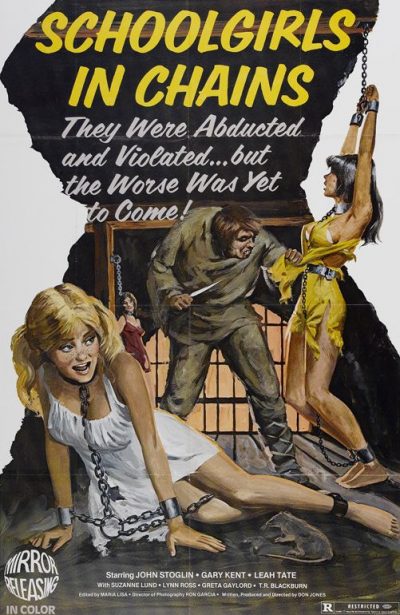 The two siblings are quite a pair. Frank apparently went unhinged after his mom’s frank confession of incest drove away his fiancée, and who now believes all women are evil. John, however, is simply retarded, and is enthusiastically onboard with kidnapping young women, in order to have a playmate. But since he’d be deemed incapable of taking care of a goldfish, this tends not to end well for his “pets.” Indeed, one of the two currently in the cellar is no fun any more, being comatose with pneumonia. The first replacement brought in by Frank makes an ill-fated escape attempt, so John starts stalking co-ed student Bonnie (Tate, a.k.a. Cheryl Waters) as the next candidate, Meanwhile, their other captive, Ginger (Lund), starts “bonding” with Frank, if you know what I mean and I think you do.

To some extent, this is much more about the sizzle than the actual steak. A great title, and an awesome poster, but the content here is likely tamer than both would lead a viewer to expect. While certainly not something for the whole family – unless it’s the Manson family, hohoho – “creepy” rather than “sleazy” would be the vibe here, especially when John is playing doctor and/or topless leap-frog with his gal pals. The trashy tone is perhaps muted since you can’t help feel some sympathy for the brothers: it’s the mom who is the real piece of work, with her sons being victims in their own right. Mind you, the hero is a college professor who is bedding one of his students, which itself rates relatively high on the Creep Scale from a modern perspective.

The overall impact is thus different from what you might expect, based on the title, since the film occupies an odd middle-ground. It clearly can’t be taken seriously – for instance, this is not exactly a sympathetic portrayal of mental illness. Yet it’s also a bit too earnest for its own good, and needs to loosen up a bit if it wants to become the slice of trash entertainment, for which the producers (who came up with the title) were clearly aiming. I can’t help thinking I would probably have enjoyed the movie shown on the poster, complete with a menacing hunchback, a bit more.