So self-referential it’s in danger of toppling over the event horizon into some kind of meta-black hole, this takes place on the set of a low-budget movie about the zombie apocalypse, which becomes the epicenter of the real thing. The newest arrival to the production is Wesley Pennington (Neville), a runner who really wants to be a script writer, who discovers he is now low man on the totem-pole. That puts him even below Susan Ford (Christian), the cook who really wants to be an actress, for whom he falls. Meanwhile, the lead actor and actress hate each other’s guts, the director hates everyone and the guy playing the lead scientist is so method, he spends all his time conducting bizarre experiments in a bunker. Oh, and the local town is eerily deserted, everyone having come down with a virulent and infectious illness. 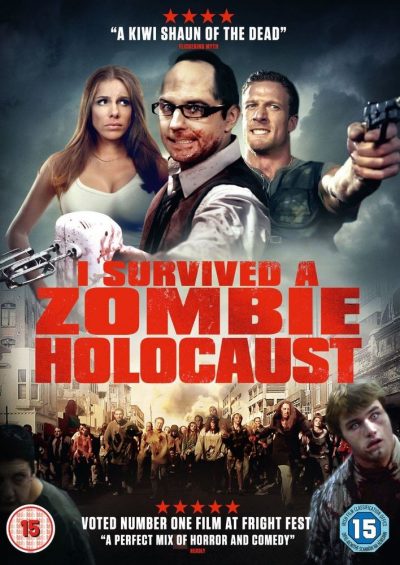 If your sleeve is going to claim “A Kiwi Shaun of the Dead“, you need to deliver rather more than what’s mostly a half-warmed collection of obvious jokes, aimed equally at the zombie genre and film-making in general. The main similarity to Shaun is the film-crew’s utter obliviousness to the impending events. Even when the scientist charges onto set to warm them of the approaching horde, it’s dismissed as him always being in character. There’s also Wesley’s pursuit of the object of his affection, who is cool to his approach, until he proves his mettle with bravery under fire. However, this is nowhere near as effective as a horror film, since you’re given not much reason to care for the characters, the hero in particular coming over as a whiny hipster possessing few redeeming features.

The comedy aspects perhaps work a little better, with the supporting characters occasionally fun to watch. The prop master, for example, is an unrepentant Yankee psychopath, who meets his end in a gloriously self-inflicted way, and there’s another member of the crew, location manager Tane (Baker), who will tell any who listens a saga of his “heroic” exploits on the schoolboy rugby field. This foreshadowing comes back nicely later, when he has to make his way through a scrum of zombies, carrying a can of petrol. Another obvious influence is the early works of Peter Jackson, particularly Braindead, though I was left wondering who the arrogant and obnoxious director, enigmatically referred to only as “SMP”, was intended to be. I would presume someone lurking in writer-director Pigden’s past.

I admit I did laugh at some moments. However, for every one of those, there were two which fell more or less flat, and there were just too many dead spots where I found myself thinking, “Is this supposed to be funny?” Perhaps it was a cultural thing, with jokes about erections, that might have had New Zealanders rolling in the Antipodean aisles. That said, I can’t think of another film with a zombie penis, and we’ll likely remember that, after the rest of this has been consigned to the bargain basement of horror-comedies