If you thought ludicrous anti-atomic paranoia was strictly limited to the fifties, I present to you this remarkably late entry in the genre. It begins with two nuclear plant workers deciding to clock off and go for a beer, rather do due diligence on a report of a pressure issue. Out in the countryside, a school bus taking kids home drives into a mysterious cloud that sweeps across the road. Local sheriff, Billy Hart (Rogers) finds the bus by the side of the road, engine running and no sign of the driver or children. Turns out the young ‘uns have been turned into atomic zombies, that only want to be hugged – except, whoever they embrace is immediately incinerated, due to the radioactive energy oozing from their pores. Or something: let’s just say, scientific explanation is not this film’s strong suit. It’s up to Hart, plus local couple John and Cathy Freemont (Shakar and Garnett), to figure out what the hell is going on and try to survive the tide of thermonuclear children. 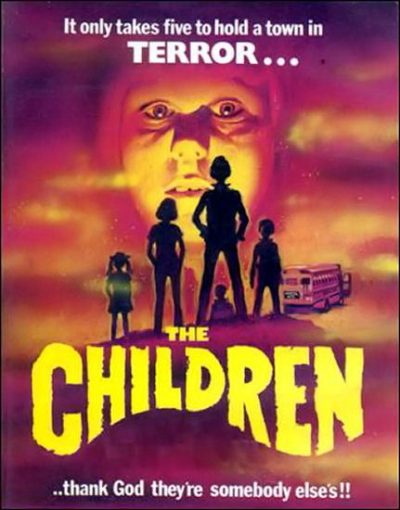 This was inspired, it appears, in equal parts by the previous year’s incident at the Three Mile Island power-plant and Village of the Damned, with a sprinkling from Night of the Living Dead. It’s not a great combination. The early scenes are ones which Kalmanowicz seems to be trying to imbue with menace, instead coming over as flat and entirely uninteresting. Things improve somewhat once Hart and the Freemonts find themselves under siege in the latter’s house, only for another bizarrely inexplicable piece of plotting. Turns out the zombie kids are impervious to bullets, but can be killed if you chop off their hands with a samurai sword, axe or whatever. I must have missed the credit, “based on an idea from a somewhat advanced nine-year-old.” Not that they bleed, mind you. Guess that must be… A side-effect of the radiation. Yeah. That’s it.

There is something subversive about the idea of children returning home to destroy their families with a simple act of affection. However, this is rarely touched on, save perhaps when Cathy knocks sheriff out for shooting at the children (before they discover the whole “Kevlar kids” thing, obvs). It prefers instead to go for the cheap shock and easy scare, none cheaper or easier than at the end, when Cathy’s pregnancy suddenly turns into a newborn child and… Well, that nine-year-old really delivered when asked for a shock ending, didn’t he? The limitation of the budget not stretching even to half-a-dozen children also severely limits the impact here.

It strikes me, this is the kind of movie which Hollywood should be remaking: a decent enough idea at its core, yet where the execution leaves clear scope for improvement. With a bigger budget, some rewriting of the more dubious ideas and an increased emphasis on the social commentary – teenagers as actual zombies has undeniable resonance – this could have worked better than it actually does.