We thoroughly enjoyed the first two entries in the “Department Q” series, based on the novels of Jussi Adler-Olsen, The Keeper of Lost Causes and The Absent One. This is more of the same, playing like a Scandicrime version of The X Files. Odd-couple cops, Morck (Kaas) and Assad (Fares), are still stuck in a basement, handling cases that aren’t so much cold, as deep-frozen and embedded in ice at the bottom of the cabinet. Here, it’s a desperate message in a bottle which has finally washed ashore, years after it was thrown into the sea by an abducted child. Tracking down the “P” who signed it – the Danish title translates at “Message in a Bottle from P”, so you can see why they changed the name – is only the start. For they discover a predator who has been targeting religious families and using their faith to ensure the abductions are never reported to the authorities. 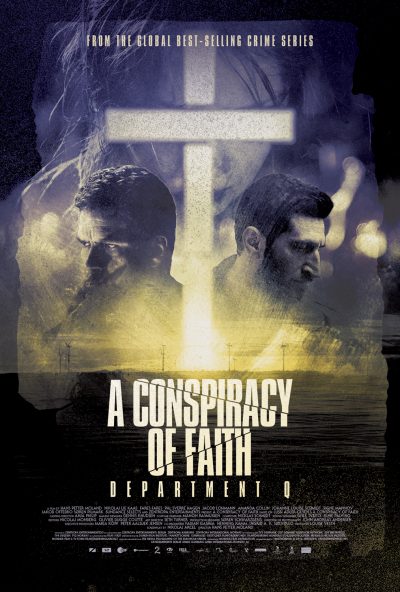 This causes its own share of issues, for Morck is a fervent atheist, and a sharp contrast to the Muslim faith held by Assad. Even if the latter doesn’t share the specific religion of the families involved, he can appreciate their position better than the blunt-force brilliance which is Morck. It doesn’t help that Morck has had to be dragged back into action, apparently having taken a lengthy recuperative mental break after the events of The Absent One. However, they put any such differences aside, once they realize quite how evil their quarry is – something driven home to the audience, probably by the sequence involving a pair of scissors. Or maybe the bit in the car-park – for one thing at which Moland is particularly good, is making an effective use of violence. While not necessarily particularly graphic, there are several moments that pack a wallop.

Yet as with the previous two entries, it’s the characters that are most impressive. For example, it’s not often that you get a discussion about religion in a movie that manages both to be interesting and avoid descending into a soap-box for the writer’s personal views. Yet Morck and Assad pull it off, to the extent I found myself nodding in agreement with both of them. Like Mulder and Scully, they are disparate personalities with their share of jagged edges, yet function together in a way greater than the sum of their parts and, despite it all, possess a deep affection for each other which is quite endearing. It’s a real shame these, being cinematic features, surface at about an annual rate. Though I suppose this pace helps ensure the quality remains up to scratch. I’d happily binge-watch an entire season of cases from the files of Department Q.