a.k.a. The Fast and the Fraserburgh. Okay, maybe not, but who knew that illegal street racing was such a thing in a small, remote North of Scotland town? [The furthest in the country from a railway station, with a population of only about 13,000. Also where serial killer Dennis Nilsen was born] I probably should have. I grew up in a similar-sized place, slightly less coastal and about seventy miles west. The local car-park beside our house was home to the local “yobs” and their motorcycles, so I get the idea – especially in a town where, to quote the old joke, they take the pavements up at 5 pm. After that? You make your own entertainment. We didn’t even have the bowling alley, with which Fraserburgh is apparently graced. Aye, residents of “the Broch” have it lucky, I tell ye. 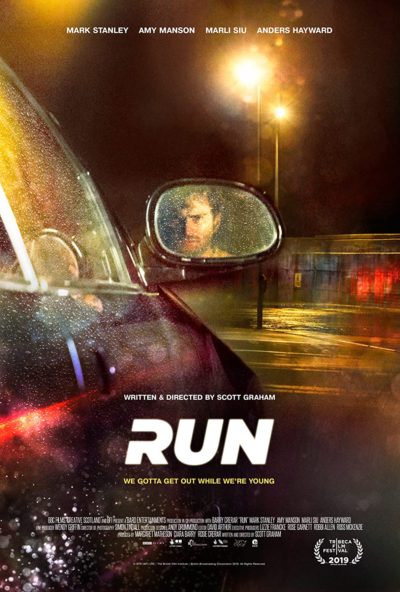 One of them is Finnie (Stanley), who used to be a boy racer himself, but now has a wife (Manson) and their sons. The oldest of them, Kid (Hayward), works alongside his dad at the local fish-processing plant, and spends his spare time on the deserted town streets in his souped-up car. However, a crisis is triggered for Finnie, when Kid is let go from his job. The resulting stress causes Finnie to take Kid’s car one night, where he meets his son’s pregnant girlfriend, Kelly (Siu), and makes plans to escape the relentless grind of Fraserburgh life. Whether he will have the courage to follow through is another question; as is, whether staying to take care of his responsibilities might be the braver thing to do.

Much of this is a low-key slice of kitchen-sink drama, and even I had some trouble making out the dialogue, deeply buried in the local Doric dialect. That doesn’t matter so much though, as the emotions come over even if all the words don’t. It does get stuck in the grim, Ken Loach-ian working class stereotypes, with humour hard to find. The closest is probably Finnie’s younger son’s cautiously deadpan response to Dad asking what he thinks of his mother’s new dress: “It’s nae for me to say…”

Instead, the film really only comes to life on those streets. The sequence with Finnie and Kelly, driving round town, racing against others or just themselves, is a joy to watch, and makes beautiful use of the locations. The huge breakwater, with waves still crashing over the top and onto the car, is something Hollywood couldn’t surpass, and Graham does a remarkably good job of capturing the essence and allure of speed.

If you’re looking for closure of any kind, you’re going to be disappointed, as the film more or less ends. The question isn’t answered, as to whether Finnie has handled his mid-life crisis, or merely put it to one side for now. Certainly, none of the problems have gone away: his son is still unemployed and his marriage on shaky ground, while Kelly is only getting more pregnant. Yet that may well be the point. I can also state with a fair degree of confidence, it’s the only film set in Fraserburgh to open by quoting from a Bruce Springsteen song. New Jersey and the North of Scotland might not be that far apart.