I just typed in “We Summon the Cliches” into Google, and can’t say I’m too sorry for this mistake. After 20 minutes, Chris turned to me, dripping sarcasm, and asked “What is the name of this cinematic gem?” I don’t blame her, for the first third is a tedious line of uninteresting stereotypes. Three vacuous young women are on their way to a rock concert by the subtly-named Soldiers of Satan – it’s never a good thing when a character’s most well-defined trait is her weak bladder.  Meanwhile in the background, we hear about an ongoing string of apparently satanic murders. At the venue they hook up with three equally cliched rocker dudes, and after the (highly unconvincing) show, invite them back to the house of lead girl Alexis (Dadarrio). 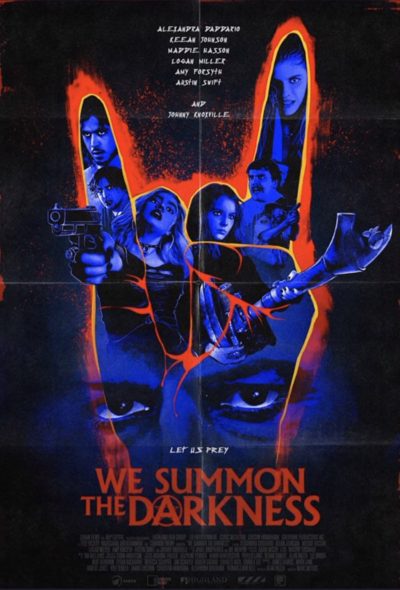 Which is where things turn out to be not quite as you might expect, though I guessed the impending twist well before it was revealed. I won’t spoil the surprise, since it’s about the only thing the movie has going for it. And for the middle third, it seems like the film just might escape its use of cliché in lieu of a script, and find its own direction. My mistake. Because it can’t commit to getting behind its characters, and reverts to trotting out another batch of stereotypes, these ones coming from the box marked “hypocritical Christians.” I’m not even religious, but that’s just some lazy shit, trying to pass itself off as writing.

For some reason, this is supposed to be set in 1988; that’s a point at which I’d have been about the same age as the characters. I can’t say this aspect rang any truer than the rest of the script, despite a contrived conversation about the merits of Megadeth line-ups, which seems to have strayed in from Quentin Tarantino’s unfilmed Spinal Tap script. Maybe the frequent references to Twinkies and other Hostess products were what the makers thought would pass for period detail? Or perhaps it was just poorly-conceived product placement, since I’m not sure how much positive impact the company will get from their snacks being the preferred delicacy of Satanic murderers.

It’s the kind of film which likes to think it’s super-smart, but is still entirely reliant on stupidity. For example, when a solitary cop shows up at the house of horrors, his actions are idiotic: we were yelling “CALL! FOR! BACKUP!” at the TV set, until his inevitable demise. It has literally nothing intelligent to say about… well, anything. Which would be perfectly fine, if the movie had delivered on the concept of occult slayings with energy and enthusiasm. Dadarrio has enough presence that, had things gone in a different direction. it could have worked, though doing so would certainly have needed more than the limply PG-13 content we are served. The disparaging comments made at one point about “hair metal” bands are particularly ironic, for this is little more than the hair metal of horror.