You wait ages for an adaptation of H.G. Wells’s classic, War of the Worlds, and then two come along at once. Not for the first time, either. In the summer of 2005, Stephen Spielberg directed Tom Cruise in a megabudget blockbuster film. But the day before that hit cinemas, the cheeky monkeys at The Asylum released their (surprisingly decent) version, starring C. Thomas Howell. At the time, we compared and contrasted the two movies, one contemporary and the other period, in War of the War of the Worlds. Approaching fifteen years later: two more adaptations, one contemporary and the other period, represent the first two TV series inspired by Wells, and are again coming out within a month of each other. So, here we are, once more pitting them against each other. I won’t go over the basics of the novel or any previous versions; see the previous article should you, inexplicably, be unaware of those. 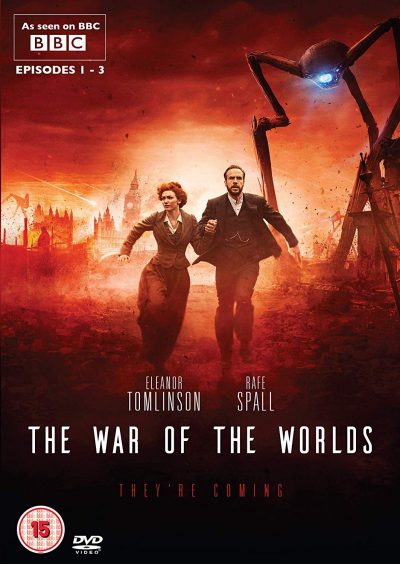 We’ll  instead head straight into the BBC version, which was announced as far back as December 2015, and is… Well, at its heart, it’s what you would expect from a BBC drama, driven more by performance than spectacle. Certainly limited in scope, and focusing largely on three characters. George (Rafe Spall) and his wife Amy (Eleanor Tomlinson), who represent the narrators of the piece, and the astronomer, Ogilvy (Robert Carlyle). This is set in 1905 England, and for about half of its overall running time (three x 55-minute eps) is a fairly straight retelling of the novel’s events. beginning with the detection of explosions on Mars, through the first landing on Horsell Common, and on through the mass destruction and the Martians’ eventual downfall.

However, it also goes on after that, with its depiction of a post-apocalyptic Earth, struggling to cope with the aftermath. The sun is all but blotted out, leading to the failure of crops and despite the “victory”, civilization teeters on the brink of oblivion. It seems, indeed, that the Martians might have won after all, turning Earth into another version of their home. This is potentially interesting, and develops the story in a logical way. Though it has to be said, they are extraordinarily talky, consisting mostly of people sitting around having conversations about how much things suck. That’s a BBC budget for you, I guess.

Giving us two protagonists does help create tension, resulting from their separation – will they ever find each other again, in all the mayhem? There are some impressive set pieces, and the visualization of the various aspects, such as the fighting machines or the Martian fire, is quite well-done. Rather less successful are the attempts at social commentary that get unnecessarily shoehorned in there. Because we apparently can’t have a show in bygone times without the televisual equivalent of disapproving noises.

Here, George and Amy are social pariahs, because they are (gasp!) living together out of wedlock and he is (where is my fainting chair?) a married man. She has a degree, yet isn’t allowed to do anything with it. It’s all very pointedly trying to have a point, yet I’m not sure what it is. Maybe Amy should be grateful for the Martian invasion, because it provides her with a chance to break out of those troublesome gender stereotypes? Hey, it may be the end of the world as we know it, but at least it smashed the patriarchy. I kept expecting Doctor Who to show up and give a little moral lecture. Please don’t mention this to Chris Chibnall. 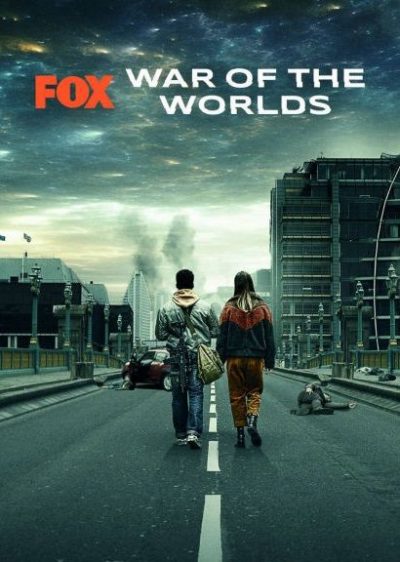 The Canal+ production is a radically different beast, in just about every way. Indeed, if it wasn’t called War of the Worlds, you might well not have guessed this was the case. The aliens arrive on Earth in a similar way, a storm of incoming meteorites. But just about everything thereafter in this contemporary adaptation is its own alien creature: no Tripods, no red weed, etc. Instead, they start by wiping out the vast mass of humanity, using what can best be described as a biological EMP, that causes the brains of everyone who experiences it, to short out. The few survivors, who escaped by being underground or otherwise protected, then have to figure out how to negotiate the post-apocalyptic landscape.

The aliens are notable by their near-absence – you can perhaps tell from the poster. Instead of the tripods, they send in bio-mechanical hybrids to track down and kill the remaining humans. If you’ve seen those Boston Dynamic “robodogs” – or, alternatively, the Black Mirror episode, “Metalhead” – you’ll know what I mean. Except, these come with a bolt-gun in their foreheads for close-up dispatch of their human prey. There are also other elements which raise questions. Why are the aliens apparently interested in babies and fetuses, ripping the latter from a pregnant woman, and abducting an entire ward’s worth of the former from a hospital. Why were animals unaffected by the biological EMP? And some humans can also “hear” the pulse; a blind girl can even see again after being exposed to it.

It’s a cracking first couple of episodes, through the immediate aftermath of the mass carnage. Unfortunately, it’s completely unable to sustain this level of energy, and thereafter largely consists of various groups of people traipsing from place to place and looking gloomy. It feels more like later seasons of The Negan Dead, where zombies stopped being much of a threat. That’s not a good thing. It also splits the focus across multiple groups of people, in Britain and France (subtitles for the latter).

On one side of the channel, there’s a posse led by neuroscientist Bill Ward (Gabriel Byrne) in London, who is trying to repair things with his estranged wife, when not trying to figure out what’s going on. On the other is astronomer Catherine Durand (Léa Drucker) in an Alpine research facility, along with her French Army pals. Both groups have various splinter factions, whose stories also need to be told, so it’s very much a case of: if you don’t like this plot, wait a minute and there’ll be another one along.

While it’s always nice to see a cameo from a building in which I used to work (Thames Exchange on the North-East corner of Southwark Bridge), the pay-off which follows for six-plus hours (eight episodes of about 48 minutes each) is painfully light. Too many questions are asked, and not enough answered. A second series may already have been green-lit, yet my enthusiasm and interest are likely below the necessary threshold. Want my guess? The aliens are actually future us, sent back in time to destroy humanity and prevent current us from causing an ecological catastrophe. That may or may not prove to be accurate, but it’s a good enough explanation for me not to bother with season two.