I sense IMDb reviews in this film’s future, such as: “2/10, failed to kill me after viewing. Over-rated.” This takes the concept most well-known through Ringu, or its sequels and remakles -“cursed” viewing material, which impacts everyone who watches it – and expands it from a single video-tape to an entire feature. It begins with mockumentary footage discussing the film’s history, and the ill events which followed in its footsteps. A screening in a Bulgarian cinema was interrupted by the cinema burning down. After being submitted to a number of festivals, programmers who viewed it suffered sudden deaths. And a Californian showing ended in chaos because the movie popcorn was spiked with LSD. This is probably the most interesting element, because it works hard, and effectively enough, at building the myth. I’d rather they had kept going down this road, for example, investigating the makers of the film, or those who participated in it, and their fates. 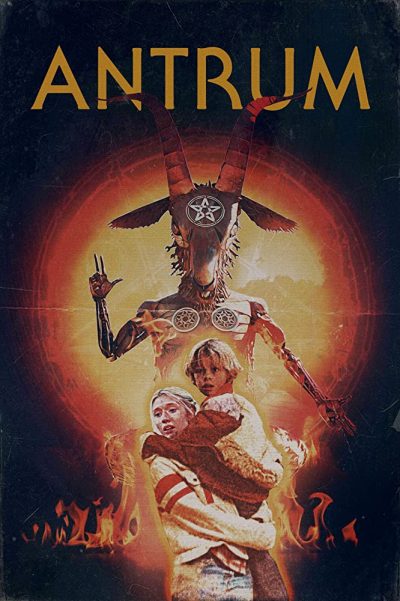 Instead, the bulk of the running-time is the film itself, in which brother and sister Nathan (Smyth) and Oralee (Tompkins) go into a forest, supposedly cursed because it is where Lucifer landed after being cast out of heaven. Their aim is to dig down to hell, and release the spirit of their dead dog, which they were cruelly informed, did not go to heaven. However, it’s clear the forest is not a happy place, with other inhabitants including those who want to take their own lives, and a particularly creepy couple, owner-operators of a brazen bull. That is a giant metal bull figure, into which any people unfortunate enough to cross their path, get stuffed and roasted. Various dark figures lurk on the edge of the scene (as well as a stop-motion demonic squirrel!). As the weirdness intensifies, Oralee – who initially thought this would be a cathartic experience for her sibling – begins to disintegrate, Blair Witch-style, under the psychological pressure.

This does a nice enough job of capturing the washed-out style of a “lost” movie of uncertain origin from the seventies. The opening credits are in Russian, though whether that’s its origin is unclear (this may be a nod to the urban legend about the Soviets drilling into hell). But watching two people digging a hole, and one of them going crazy, isn’t really enough on which to hang a feature film. The injection of subliminal imaging, such as 170+ sigils of Astaroth, and supposed binaural audio, don’t particularly offer much additional impact. It probably peaks with the legal disclaimer which separates the documentary portion from the actual movie. This is an intertitle waiver ending in, “If you disagree in any way with this notice, you must leave the theater now.” The 30-second countdown attached to it, is a lovely nod back to the “Fright Break” before the climax of William Castle’s Homicidal, giving the audience a similar chance to escape. But Antrum is also like most of Castle’s works, in that the sizzle is considerably more impressive than the steak.