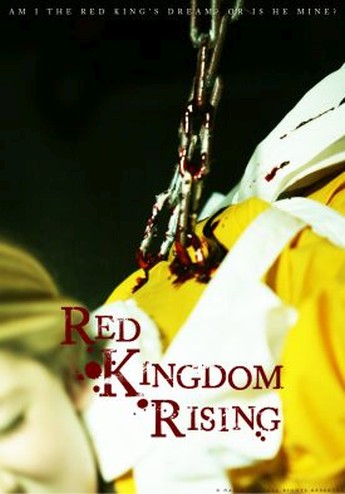 In an effort to come to terms with a murky past which she has suppressed, Mary Ann (Stride) returns home, only to find her mother (Maimone) a virtual hermit on the edge of insanity, tormented by her religious convictions and what happened previously. Against her better judgment, Mary Ann opts to stay and ensure Mom is okay. But after being force-fed a noxious substance, she finds herself trapped in an alternate dreamscape, which has more than a hint of Alice in Wonderland – which, by no coincidence, happens to be the bedtime story her father (Caron) liked to read to her as a child. Most obviously, there’s a young girl (Turnbull), with a Cheshire Cat mask, who appears to be the key to Mary Ann finding her way back to reality, and away from the Red King, whose intentions are very clearly, very evil.

There’s a lot to appreciate here. For a low budget, it looks remarkably good: if a little short of 35mm quality, that works for things, rather than against them, enhancing the “other worldly” nature of things. The performances are a little variable. Maimone is likely the standout, delivering a maternal figure with a really creepy edge, to the extent that it is difficult for the others to match, though they’re decent enough. The main issue is that, right from the opening scene, we were almost always one step ahead of the film, and worked out where it was going, long before the movie (and Mary Ann) did. That said, this isn’t a film that depends on a revelation, and there’s more enough to enjoy and appreciate, such as Martin Thornton’s soundtrack, while reminded me occasionally of Hellraiser.