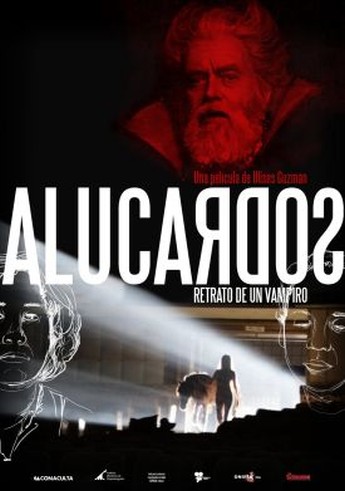 It was only some way into this surreal drama-documentary about the life of Juan Lopez Moctezuma, that I realized who he was – the director of cult lesbian vampire classic Alucarda, also known as Sisters of Satan. I knew nothing about the man beyond that: I’m not sure I know much more, or at least, I’m not sure I can claim much more factual knowledge. This is certainly an odd story, partly telling Moctezuma’s life, from his work as a producer with Jodorowsky, through a spell running a TV channel in Spain, then his return to Mexico, where he made the movie for which he is best known, before descending into insanity. But the other half tells the story of two even more bizarre fans, Manolo and Lalo, who are obsessed with Alucarda: they track the director to the asylum in which he is institutionalized, break him out, and when they discover he doesn’t know who he is, start showing Moctezuma his own films, and taking him to the locations where they were made, in the hope of triggering a return to his sense.

The main problem is the threads take far too long to join up: initially, you’re left completely in the dark as to Manolo and Lolo’s significance, or even relevance to proceedings, despite their pivotal role. It’s a hard slog for the viewer until the connection is finally made, and Chris opted for sleep instead. I persevered: knowing of Moctezuma’s work is perhaps a leg up, and I found the longer this went on, the more engrossing it became, though it retained a weird, dreamlike quality which left me unsure how much was fact, and how much fiction. That’s not necessarily a bad thing, and if you can take this for what it is – more of a reimagining than a hardcore documentary – it’s unique. Just don’t expect it to provide all the answers, or even ask the basic questions.