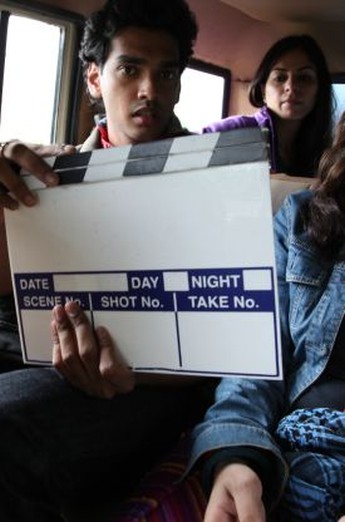 Yep, that’s the title. As in “question mark”. “A group of friends went to shoot their film project, but never returned. A few days later, their camera was found.” Hmm. That sounds familiar. For this is an Indian take on The Blair Witch Project, and is fairly shameless in its thievery, right from its lifting of the introductory text. Here, the victims (and there’s no doubt that’s what they’ll be) are making a short film, under director Vicky (Chatwal), set in a house deep in the Indian countryside. However, it’s not long before strange stuff starts to happen, escalating through people being dragged about, and apparent possession by evil spirits – by the end, it feels more like a found-footage version of The Evil Dead, perhaps, though the level of special effects is a lot lower. The cast all use their real names, and the dialogue was improvised, so even with the editing of the footage which apparently occurred, it’s clearly about as far from your typical Bollywood film as you can imagine: no glossy production values, and absolutely no singing whatsoever.

That’s both a strength and a weakness. To the Indian audience, for whom it was made, this could be entirely innovative. To a Western viweer, however – for whom the words “found-footage” trigger a reflex rolling of the eyeballs – not so much. And I hated Blair Witch. Ok, I didn’t hate it; but definitely found it vastly over-rated. 15 years later, I’m not sure I want another. However, this does a better job of keeping the camera steady, and the characters are less irritating. You certainly have to pay attention, because when things happen, they tend to happen extremely quickly, and not for long. The results have their fair share of impact, but also provokes some unintentional laughs, not least through some prudish subtitling: when one character clearly yells “Fuck!”, the subs inexplicably claim he says, “Gosh!” The obviously derivative nature is a significant mark against, though overall I did prefer it to BWP, and a couple of moments were genuinely creepy, even for a jaded viewer like me. Those chills probably justify its existence, though it’s an occasionally close call.