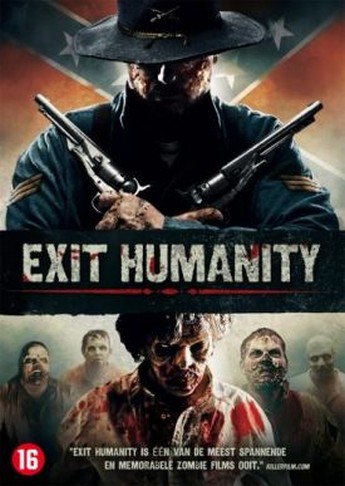 I have a low tolerance for films that rely on a lot of voice-over work. It’s perhaps a throwback to the dreadful efforts in the original cut of Blade Runner, which came damn near to wrecking the entire movie, but they almost feel like a lazy cop-out: why bother to act, when you can just describe the character’s emotions instead? And boy, especially early, this has a lot of voice-over. In some ways, it’s understandable as Civil War veteran and hero Edward Young (Gibson) is left alone after his wife and son fall victim to a 19th-century zombie plague. Alone, but not exactly quiet, shall we say. Journeying to scatter his son’s ashes, he meets Isaac (Seybold), who is looking to rescue his sister (Hayes) from the deranged General Williams (Moseley), who is carrying out tests on human subjects, convinced there is an immunity that can be discovered and used.

It’ll take you a while to get to the meat, and we teetered on the edge of turning this off as we endured another scene of our angst-ridden hero, pouring out his emotions in voice-over, the film also over-relying on animated sequences in lieu of special effects. Once he teams up with Isaac, and we no longer have to listen to his (not-so) inner monologue, things do improve somewhat. There’s a decent supporting cast beyond Moseley, who in some cases feel very underused – particularly Stephen McHattie as the doctor assisting Williams. It feels a little like Day of the Dead with the General overseeing mad science in the same way Captain Rhodes did in Romero’s flick. However, here, the zombies are more a sidelight – the final battle, when it comes, is far more in line with traditional Western roots than the genre crossover which this looks like it might be. It’s mostly a Western with zombie elements, and between that and the flaws in execution, it ends up being less interesting than we hoped.