Cassie Naylor (Wareing) struggles to manage her smallholding in the Derbyshire Peak district, since the disappearance of her husband. What the locals don’t know is, she buried him in a remote spot on the moors in the middle of the night, for reasons that are, at least initially, unexplained. Despite the part-time help of veteran farmhand Cooper (Bradley), Cassie and her two daughters are on the verge of giving up, when an ‘angel’ arrives, in the shape of transient Aden (Regan, who looks like a roughed-up version of Gerard Butler). He’s prepared to help out around the farm, in exchange for board and lodgings, though the teenage Hannah (Lourie) quickly decides his intentions are more about getting “into my mum’s knickers”. While he proves fiercely loyal to anyone who poses a threat, it turns out that doesn’t scratch the surface: he is a great deal more unbalanced. Not only is the new employee intent on turning the Naylors into “his” family, Aden also knows a great deal more about the secrets they keep than he should. How is that possible, for someone whom they’ve never met before? 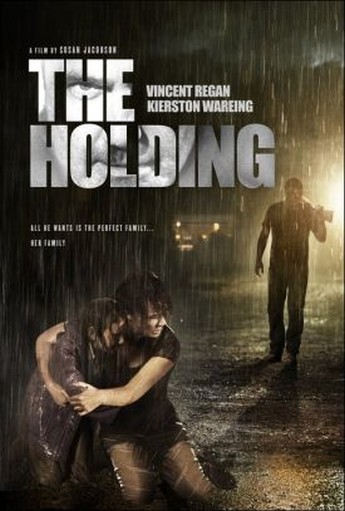 Crisply put together, this is clearly influenced by The Stepfather, but adds enough new ingredients to the mix to become an example of Britsh pastoral horror, not dissimilar to Straw Dogs. What seems initially a lush, inviting countryside, gradually degenerates into a dark, water-drenched nightmare, as the truth gradually becomes apparent of the danger in to which Cassie has put her family. This kind of thing can often come off as contrived, but it helps that the protagonists here generally behave in a way not too dissimilar from the way intelligent people would – which is a lot rarer for the genre than you’d hope. It’s subtle when it needs to be subtle then, when it has finished with the tension thing, ramps up the action for a no-holds barred battle, that is more than adequately satisfactory. Helped by good performances from the leads – even Lourie, who could easily be just the irritating brat she appears to start with – this is a slick, yet still uniquely British, twist on survival horror.