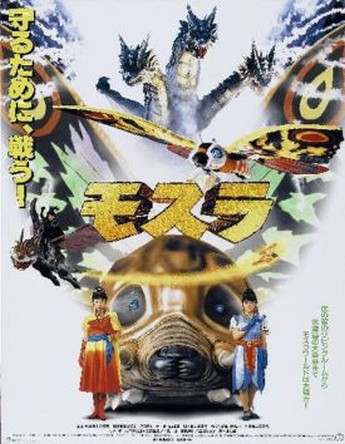 As part of the re-invention of kaiju around the turn of the millennium, Mothra had the dust blown off her wings, though this entry seems more targetted towards a juvenile audience, with a clunkily obvious environmental message. The basic concept remains: in this case Death Ghidorah is released from its 65-million year captivity beneath a Japanese mountain when developers pry the seal off its tomb. Understandably, it’s somewhat peeved, and begins laying waste to everything within reach of the three heads and flame breath. The Mothra sisters (no longer twins) fly to the rescue – now riding a mini-Mothra, which presumably gets better mileage – only to be confounded by their evil sibling Belvera, who intends to use Death Ghidorah for her own purposes. A couple of insufferably cute kids help, and the full-scale version comes to the rescue, albeit at the cost of her own life, sacrificing herself so that her caterpillar can escape. Pupation ensues… And a sleek, new Mothra 2.0 returns to battle Death Ghidorah before any more spotted owls can be incinerated.

It’s a surprisingly rural monster movie: for once, Tokyo escapes entirely unscathed, with the only damage to a large tract of Hokkaido forest, which is kinda disappointing. It doesn’t seem a “real” Toho movie without scenes of townsfolk running and screaming. There’s also an over-lengthy air-battle between the Mothrettes and Belvera, round a living-room, and too much of the focus, especially early on, goes to the kids, who are barely old enough to remember their lines and basic actions, never mind becoming fully-rounded characters. The good news is, after the half-way mark, the monsters take over, and there is some inspired pyrotechnic work: Death Ghidorah is particularly…flamey. Mothra 1.0’s death is remarkably poignant, as she settles on to the surface of the sea, and sinks despite her offspring’s desperate efforts to keep her up. Not a dry antennae in the house. Damn that whole “circle of life” thing. Of course, it’s not the end, and her child has some spiffy upgrades. After a dodgy start, this recovers admirably, and when they restrain the desire to play to the prepubescent gallery, is indeed a rebirth.