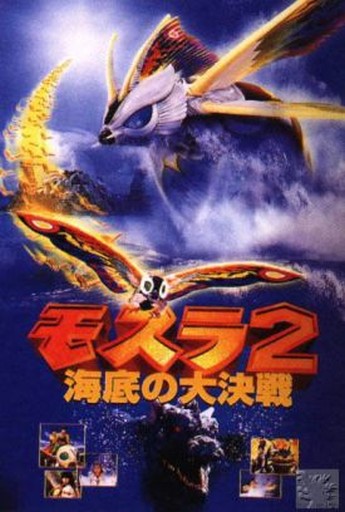 This feels less like a Mothra film, than some bizarre crossbreed of one with The Goonies, The Abyss and Indiana Jones, directed by Quentin Tarantino after a cocaine-fuelled Japanese pop-culture binge. To say it makes little or no sense, would be an insult to nonsensical things. Let me try to summarize the plot. As in its predecessor, the Mothra Not-so Twins team up with some kids, to defeat a monster awakened by humanity’s desecration of Earth. Here, it’s Dagahra, a pollution-eating monster that went wrong, who has been awakened by the level of toxins again present, and is now releasing mutant killer starfish into the ocean. The kids have a creature called Go Go, which looks like an oversized Furby, and which is the key to raising a giant temple out of the ocean. Inside there is supposedly the treasure which is the key to defeating Dagahra, but also as before, evil sibling Belvera is in the opposite corner, running interference for it. By the time of the final battle, there’s an awful lot of running around corridors, and the arrival of Mothra 3.0, a robo-aquatic version which can split itself into hundreds of mini-versions and fly around inside Dagahra.

I’m sure this all seemed a good idea at the time. All the end product does, however, is remind you of what a simple concept is at the core here: fighting monsters. Everything beyond that is superfluous – or should be, and because it isn’t the case here, this feels like a pro wrestling pay-per-view consisting entirely of promos and back-stage shenanigans. The kids are entirely unengaging as are Belvera’s minions, and if the first film was capable of appealing both to kids and adults, this one seems only interesting in pandering to the eleven and under demographic. The editing and pacing are way off, with scenes starting and stopping in what feels like the middle, and especially early on, there’s such a lack of flow it feels like you’re channel-surfing Japanese TV. Maybe it would have been better if we’d crammed our faces full of sugary snacks and caffeinated beverages before viewing; instead, by the end, both of us were surreptitiously using our phones instead. It’s a litany of our faith that Mothra movies are good. However, said faith has officially condemned this entry in the series to our version of the Apocrypha.