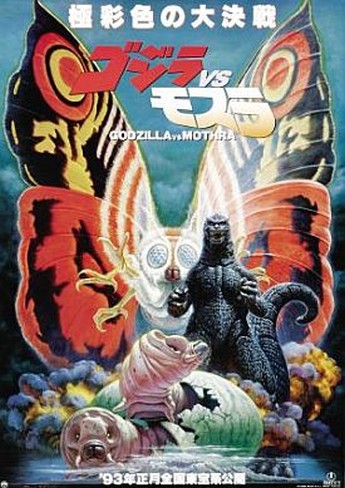 It was another 28 years before Mothra would get title billing, though she had supporting roles in some other Toho works in the meantime, so kept busy. When she returned, it was a massive improvement in just about every way over its predecessor, even though, in many ways, it’s more a remake than a sequel. Again, a typhoon washes up Mothra’s egg, and an unscrupulous businessman has his eye on the potential profits it could bring, despite the plaintive pleas of its two tiny guardians. However, the threat of Godzilla – here, apparently freed after a meteorite crashes to earth – can only be stopped by Mothra. The main addition is an anti-Mothra, Battra. He was created by the Earth millennia previously, to counter the threat caused by humans at that point, but has also returned to action. Initially, it looks like he and Godzilla will be an unstoppable force of destruction, but Mothra convinces her sibling to do what would be called “a face turn” in pro wrestling, and switch to the side of good. Can the two winged behemoths (hohoho!) work in tandem to stop Godzilla?

Giving the two moths a ranged weapon, in the form of energy beams, was a wise move, making them more credible as an opponent to the big G, and particularly when working in tandem, the battles here are excellent. However, the movie also has what’s perhaps the most beautiful sequence in any Toho film, in which Mothra hatches from her giant cocoon, propped up against the Japanese parliament, with virtually the only sound her guardians’ song, and flaps her way off over the stunned onlookers to take on Battra. It’s simply awesome: I’d embed a Youtube video of it here, except something something Sony Corporation something blocked. 🙁 As well as the usual large-scale carnage, I also thoroughly enjoyed the way both Battra and Mothra were given genuine back-stories to explain their behaviour, rather than just being rampaging for the hell of it. Truth be told, those were rather more convincing than most of the humans get, but there’s no arguing who the star is here: she has wings, and is absolutely wonderful to behold.