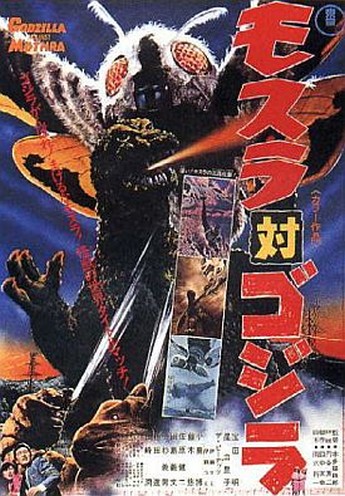 A giant egg washes up on the Japanese shoreline, following a typhoon – an entrepreneur buys it from the local villagers, and starts building a theme-park around it. He ignores pleas from the Mothra fairies to return the egg to her island; they say (in perfect unison, naturally), that if the egg hatches, the caterpillars will cause great destruction. Rebuffed, they take their leave and return to Infant Island, pouting somewhat. The egg is not the only over-sized arrival, howwver, as it has also awakened Godzilla, who begins his rampage. Reporter Ichiro Sakai and photographer Junko Nakanishi go to Infant Island, to beg for Mothra’s help: the fairies eventually agree, even though it will take the last of her life energy. Air Squadron Mothra heads for Japan, not just to protect them, but also save her egg, which is about to hatch.

While highly regarded, I definitely didn’t feel this was anywhere as good as the original. The basic concept is flawed: how can a giant moth fight Godzilla? The answer is, apparently “very badly”, and the larvae are no great shakes in this department. Without wishing to give much away, watching caterpillars squirt silk at a giant lizard for ten minutes… Not exactly enthralling stuff. Even the scenes of destruction are disappoint: it’s more like DrunkZilla; he brings the Tokyo Tower doen by accident, after his tail gets stuck in it. Silly Gojira! There are still some memorably images e.g. the giant egg on the beach, Godzilla rising up out of the earth, or Mothra protectively cradling the egg with her wing. However, the overall impact just isn’t there: while the two leads are fine on their own, they make a poor fit, and the end result is like watching a romance starring Angelina Jolie and Adam Sandler.