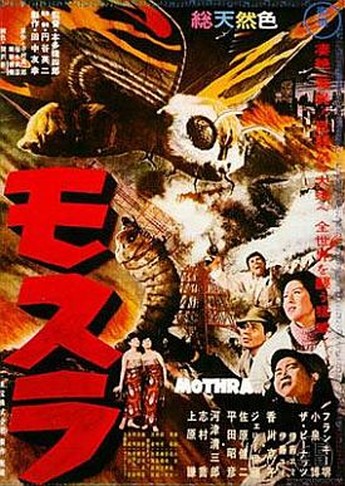 Based on the serial novel, The Luminous Fairies and Mothra, by Takehiko Fukunaga, this first entry establishes the basic parameters, and ways in which Mothra differs from her predecessors, Godzilla and Rodan. An expedition to ‘Infant Island’, in the wake of a search and rescue mission, finds two tiny women. Evil foreign entrepreneur Clark Nelson (Ito) – who has clearly never seen King Kong – returns to the island to scoop them up and create the ‘Secret Fairies Stage Show’, which wows Tokyo audiences. However reporters Zenichiro Fukuda (Sakai) and Michi Hanamura (Kagawa) are less impressed. And neither are the island natives, who awaken Mothra from her slumbers. The impressively-aquatic caterpillar that hatches, ploughs through the Pacific to reach Japan and rescue its mini-guardians, but Nelson returns to his home country of “Rolisica” with his captives. The caterpillar pauses briefly, to catch its breath and pupate, turning into the marvellous winged creature we know and love. Rolisica had better batter down the hatches, as there’s a large-eyed, winged storm coming… And she’s peeved…

The big difference is that Mothra is a monster with a motive, not just destroying Tokyo for the sake of it. And, if the results do seem somewhat excessive, given the aim [she’s trying to rescue approximately 24 combined inches], it is a justifiable exercise, and one that makes her a much more sympathetic character. I note in particular the despicable bad guy is clearly intended to be Western. Ito was born in New York, of Japanese descent, and served in the US miltary during WW2; meanwhile, the Rolisican capital, New Kirk City, bears more than a passing resemblance to NY. The effects are a somewhat mixed bag: the models and blue-screen work are solid, but when the fairies are picked up, it’s painfully obvious that we are dealing with dolls. Indeed, much of the early sequences are more amusing than anything else e.g. the “silent alarm” which it appears everyone in a ten-mile radius can hear. However, once the egg hatches, the film acquires a stately grandeur which can only be admired and respected. Besides, how can you not love a film with the tagline, “Mightiest monster in all creation! Ravishing a universe for love!”