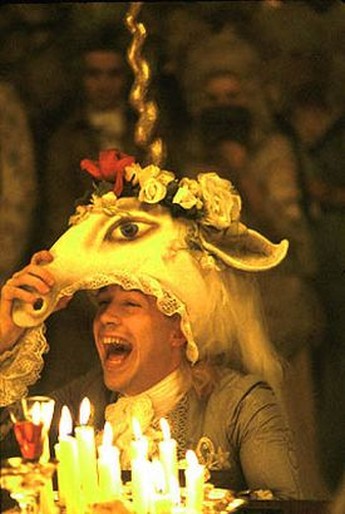 Mozart was, arguably, the most brilliant composer of all time, but it wasn’t his music I was hearing in my head throughout this (highly-dramatized) biopic: naturally, it’s Falco which I kept humming (more or less) under my breath. Damn you, Austrian Europop icon! Back in the 18th century, this is an interesting glimpse into the mind of genius, musical composition and jealousy. Salieri (Abraham) has it good, in his role as court composer, but the arrival of new kid Mozart (Hulce) rubs him entirely the wrong way. Sure, the kid’s got undeniable talent, but is crass, boorish and his music possesses, in the words of one critic “too many notes.” With Salieri having been convinced God is speaking through him with music, it’s a shock to find God apparently showering even more divine favor on this “boastful, lustful, smutty, infantile boy.” Salieri fumes, frets and eventually decides to put into action a plot to drive Mozart, whose mental state is already teetering on the brink, over the edge.

The Salieri/Mozart feuding is fascinating and engrossing stuff, even if it’s stretching the truth considerably to blame the former for the maestro’s death [everyone knows Mozart was actually killed by the Freemasons, for revealing their secrets in The Magic Flute]. Watching their interplay is wonderful, and Abraham fully deserved his Oscar, for his portrayal of a man who knows, good as he is, that he has met someone who is better. The gulf between them is never clearer than when Mozart is dictating to Salieri, trying to convey what he hears in his head, and break it down to the level that a mere mortal can put down on paper. Less interesting is when Mozart is on his own, because he does seem largely as Salieri describes: a petulant child-prodigy, with little time or inclination for those around him, except in the most primitive way. While you could certainly argue it’s too long – at 160 minutes, even the 12″ version by Falco didn’t last nearly so long – it’s definitely not a chore. Consider me rocked, Amadeus.