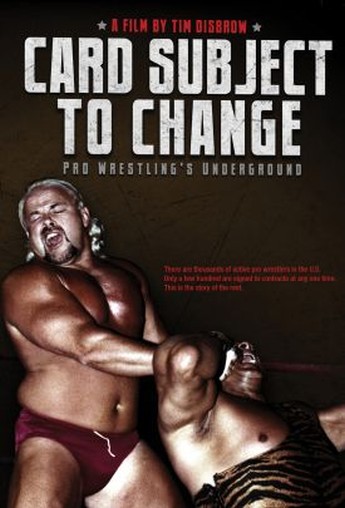 Actually, it doesn’t truly “star” Necro Butcher, but there’s no way I was going to leave a wrestler with a name like that off the list. We’ll talk more about him later. This is, generally, a wholly-indie version of Beyond the Mat: rather than focusing on the WWE and its superstars, it centres on the National Wrestling Superstars, a federation run by Falco out of New Jersey, who puts on 50-60 shows per year. His roster includes the likes of Sullivan, a veteran approaching the end of his career and Acid, an up-and-coming prospect whose reliability is more in question than his talent. There are also interviews with others tangentially connected to the promotion, like Lacey Von Erich, a third-generation wrestler and the aforementioned Mr. Butcher, whose specialty is bleeding. A shit ton. No, seriously: YouTube his name and you’ll see that barbed-wire and fluorescent light-tubes are everyday objects in his universe. His forehead tells a million stories.

It’s the kind of stuff we find endlessly fascinating, but the first half of the film is really too episodic to work, without any connecting theme or structure, it feels more like a series of webisodes than a “proper” documentary. That changes dramatically in the second-half and things also take a much darker tone, as the shadowy underbelly of wrestling – steroids and the abuse of other drugs – is addressed, in a way that manages to be both illuminating and sympathetic. Having lost some wrestling friends to exactly these dangers, we can attest to the very real risk these things pose. Fortunately, the film avoids lecturing and adopts a credibly even-handed approach. It’d be easy to paint the whole industry with the same brush, but as Necro is at pains to point out, wrestling has taken him to places he’d never have seen, with the likely best hope of other employment being work in a sawmill. All told, it diminishes neither the lustre nor the dangers of the sport, striking a balance. Though it’s most likely to be of interest to existing fans of indie wrestling, who will undoubtedly recognize characters from their local federation in Falco’s NWS.