After taking out the legitimate caregiver, “Nurse Becca” (Mounter) makes her way into the house of retired actress Megs Topplethwaite (Lowry), with robbery on her mind. But it soon becomes clear that Megs is not going to be the easy pushover she initially appears – not least because, the line between reality and her film career has become dangerously blurred. Dangerous, that is, for anyone who crosses her path. While looking for the desired loot, Becca discovers a slew of dead bodies all over the house, mostly from food-delivery folk, whose ethnic entrees prove particularly effective at triggering Megs’ psychotic breaks. 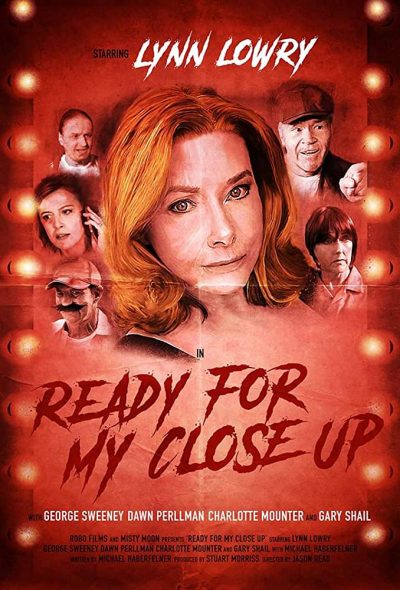 For instance, Chinese food causes her to flashback to her time making Karate Karl Fights the Undead Ninjas (top). Yeah, I know neither karate nor ninjas are from China. I suspect that’s part of the joke, along with Megs going full-blown cultural appropriation and turning Japanese, right down to giggling behind her hand. Megs is distraught when the delivery guy – not Chinese either – has never heard of her films. “They were shot in the Philippines, standing in for… Well, for somewhere in Asia,” she informs him. Megs then adds, “Back then they still shot movies on celluloid,” before turning pointedly to the camera and breaking the fourth wall with an acerbic, “Not that digital shit they use nowadays.” Ouch. Need some aloe vera for that burn?

Similarly, Megs butchers the Spanish language as “La Ranchera”, when her Mexican order arrives. Then “Luigi” the pizza-delivery boy (Shail) arrives, with his fake mustache, and falls victim to the giallo-like Gloves of the Strangler. It’s all remarkably politically incorrect in its wholesale and gleeful cultural appropriate. Naturally, I laughed like a drain. Lowry goes at top speed down the Sunset Boulevard street of mad, former leading ladies, and it’s a joy to watch. The film is based on an idea by her, and it’s easy to see the appeal of a role that was clearly a load of fun to play. The main problem is perhaps, the shadow she casts largely blots out the rest of the cast. Mounter, in particular, seems almost overwhelmed; she fares much better in the opening scenes where she’s trying to construct an ever less-plausible ruse to divert the real nurse.

Still, there’s enough here to sustain the 30-minute running time, especially if you’re a fan of the various genres which are lampooned – because it’s clear the makers are, and this self-awareness goes a long way to knocking off the occasional rough edge. There’s also something essentially British about proceedings here, and how the mayhem unfolds behind the front-door of a terraced house – not unlike the one in Tulse Hill where I used to live. It’s easy to imagine the next-door neighbours pulling the curtains and ignoring the sounds of carnage, because they don’t want to make a fuss. Someone just needs to make Karate Karl Fights the Undead Ninjas for real. After all, it couldn’t be any worse than The Velocipastor, could it?