Bressack achieved a certain notoriety in 2015, when the BBFC gave a rare decision n these more liberal days, declining to issue a certificate to his home-invasion feature Hate Crime. I haven’t seen it, but on the basis of this, I don’t feel like I’m missing much. For it is a plodding occult revenge film, with a twist which even I – usually oblivious to such things – managed to see coming from about fifteen minutes in. 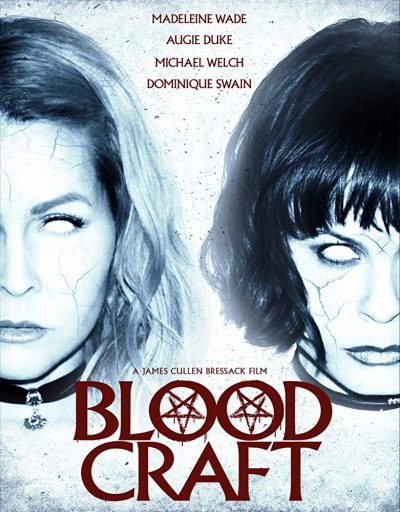 Grace (Wade) gets word from back in her home town that her father (Sheridan), the local pastor, has died. Returning to the family home, she links up with sister Serena (Duke), and it becomes clear that Dad was a real nasty piece of work, abusing both daughters in ways bordering on the unspeakable. Since he never paid for his crimes, the daughters decide to resurrect his spirit so they can achieve closure. Fortunately, Mom (Dominique Swain, sporting a German accent, because… reasons) was a witch, who left the girls a spell-book. Things don’t go quite as planned, and after a brief stay in a doll, Dad’s soul ends up in the body of Tyler Waters, an old pal who snuck into the house looking for the loot the pastor supposedly embezzled. Not helping matters: his father is the local sheriff.

It’s a ludicrous and poorly thought-out concept, on almost every angle. If Mom was such a powerful wiccan, how come she could manage absolutely nothing to protect her daughters? And how the hell does a priest end up marrying a pagan, anyway? The sisters’ plan for vengeance is similarly ill-considered from start to finish, with the spell-book conveniently delivering its content strictly at the moments necessary to the plot. Not helping matters is the random nature of the plot, which bounces back and forth without rhyme or reason: as a result, it’s almost 40 minutes in before the first occult ritual takes place, at least twice as long as it should be.

Additionally, the script bolts on all manner of things which the film could have done without. The father’s profession, for example, seems there purely as a swipe at organized religion (#SoBrave). Grace’s choice of career – oh, look, she’s a stripper – serves no significant purpose either. It doesn’t help that Wade seems to have the dramatic range of potato salad. Being charitable, this could be because she’s depicting someone who is emotionally dead, as a result of all her past traumas. I wasn’t convinced.

It all builds, via the least-realistic abortion in cinema history, to the revelation mentioned in the first paragraph. This shocks Grace considerably more than it did me, and will only come as a surprise if you haven’t been paying attention Though that would certainly be understandable. I guess some credit is due for trying to address tough subject matter here, including rape, incest and domestic abuse – not exactly the stuff of “entertainment”. However, the treatment they get here falls a long way short of doing the topics justice.