When this came out, there was a mild (maybe a 3-4 on the Richter scale) ripple of furore, as Boll said this would be his last film. While many rejoiced at the news – he has been a favorite whipping boy of many video-game fans for his poor adaptations – we were kinda saddened. For the truth is, Boll’s career is not the unmitigated disaster some would have you believe: films such as Darfur are perfectly competent, and his Rampage series have also had their moments. On the other hand, he previously rage-quit the film business in June 2015, so who knows if this one will stick? 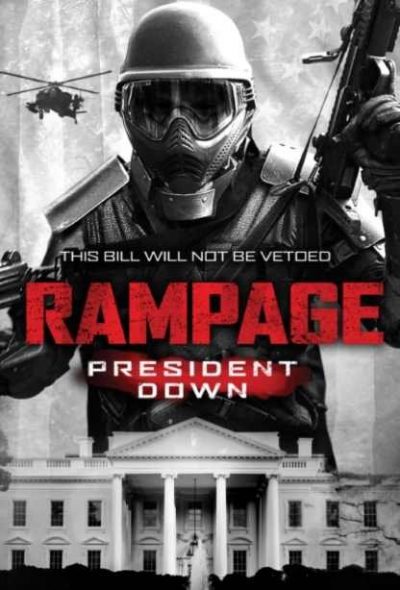 At least Boll wasn’t whining about piracy being the reason, unlike say, Adam Green, who seems always to blame other people for his failures. Either it’s “shitty treatment” by the distribution company or, I kid you not, comparing those who downloaded his film to rapists. That’s the way to win hearts and minds, Adam. Boll seems more inclined to target Netflix and their siblings, saying, “With streaming everywhere there is just a big wave of movies flooding around and you have no impact. The market is dead.” Which is kinda ironic, because guess where I watched Rampage: President Down? Yep: Netflix.

It is a disappointing end to the series, however. Bill Williamson (Fletcher) spends the vast majority of this one hiding out in the woods, apart from a brief foray to the capital to assassinate the President, VP and Secretary of Defense – I was expecting that to be the climax, but it ends up as a largely-unseen early incident. This kinda backfires, as rather than starting the revolution he intends, the government choose to frame ISIS for the murder, using it as an excuse to nuke the middle East and divide the spoils between the US, Russia and China. Well played, Washington: well played. But Billy going Unabomber doesn’t exactly make for gripping cinema, despite the ludicrous twist which has him listening in to the ongoing investigation, courtesy of a bug in the FBI office planted by a sympathizer. It largely lacks the transgressive nature of the original, or the media satire which powered the first sequel.

The film tries to invest it with some emotional heart, presenting its anti-hero with an unexpected son, courtesy of his girlfriend (Lowe), but this is a mis-step, since Bill’s refusal to give a fuck about anyone or anything, was a defining aspect of the character: the scary thing was, he was a cold-blooded psycho who made sense. We just don’t care about him cutting a video for his rug-rat. And how is he now an expert sniper, super-versed in military tactics? The action is competently staged, and there are still some moments capable of making you go, “Hmm…”, although the attempts to use the FBI agents (Baran and McDonell) to present a counter-viewpoint, are token at best.

However, I must admit, I got a hearty snort out of the tagline on the sleeve (right). And events over the past few months have likely given this rather more topicality, than it might have had if we’d had a boring Clinton victory in the election…