This focuses on security guard Jim Baxford (Purcell), whose wife Rosie (Karpluk) is fighting her way back from a brain tumour. However, their insurance runs out, and thanks to a combination of poor timing – this being set just after the global meltdown – and financial malfeasance, led by broker Jeremy Stancroft (Heard), their savings evaporate like morning mist. The escalating debts lead to Jim losing his job, and Rosie commits suicide, presumably to stop being responsible for piling up any further costs of treatment. That pushes former soldier Jim over the edge, and he begins to take revenge on the bankers and traders he blames. At first, he picks them off one at a time, but he’s building toward providing a far greater spectacle. 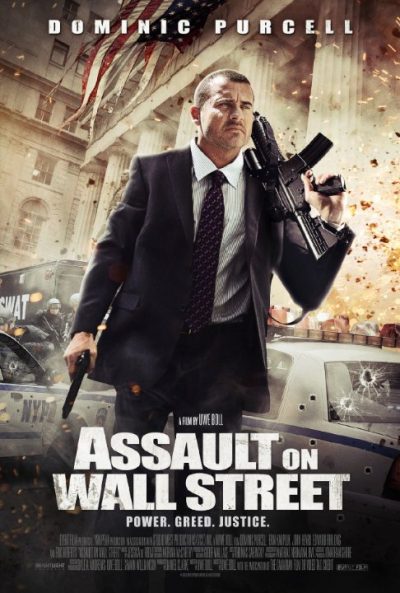 What’s interesting here is the heroic depiction of Baxford. Boll’s previous efforts have largely been neutral depictions of spree killers, though simply showing things from the killer (or killers) point of view, makes them more sympathetic than most mainstream works. This, however, makes few bones about its belief that Baxford’s reaction is little short of entirely justified. The first half of the film is mostly about putting the character through so much hell, that his murderous acts in the second half – not just of those directly responsible, but an awful lot of people in the wrong place at the wrong time – seem more like the reaction of a cornered animal with no way out, than a possibly PTSD-affected killing machine.

It certainly does have its effective moments, particularly the scene where Jim is coming home on the subway after losing his job, completely unaware that as he does so, Rosie is preparing to commit suicide in their bed. Boll intercuts the two people, each lost in their own madness, to quite devastating impact. In terms of depicting the carnage wreaked on the lives any number of people by the meltdown, it’s startlingly effective. To be honest, probably more so than the cheap rabble rousing of the final showdown, where Dem Ebil Banksters get what’s coming to them. Subtle it ain’t. and by making is villains financiers, Boll is certainly going for low-hanging fruit and soft targets – the bad guys have all the depth of Ivan Drago from Rocky 4, while Jim has no faults, except he cares too much…

But sometimes a straightforward polemic is just what’s needed, and as a shriek of rage, it’s a lot more honest than Wolf of Wall Street. Boll does a fairly nice job of making Vancouver stand in for New York [with the help of some guerilla shooting], and Purcell’s physical presence – I’m sure he was a WWE wrestler in a previous incarnation – helps significantly. The usual cast of Boll regulars, including Michael Pare and Clint Howard, rounds things out. While this may be an incredible simplification of a situation which was a lot murkier and less clear-cut than portrayed here, it has a single-minded intensity that’s laudable.