I guess I’d forgotten how wonderfully excessive Indonesiam movies could be. With it being a Muslim country, it’s easy to think of cultural repression, but at least in the area of gratuitous violence, you don’t have to try hard to find examples which show otherwise. My first exposure to Indonesian cinema was over 30 years ago, with killer shrubbery kung-fu flick Special Silencers, and I’ve occasionally bumped into similarly gory genre entries since, most recently The Night Comes for Us. Sex is more problematic there, but blood, guts and people being highly unpleasant to each other? Bring it on, as Queen of Black Magic proves. 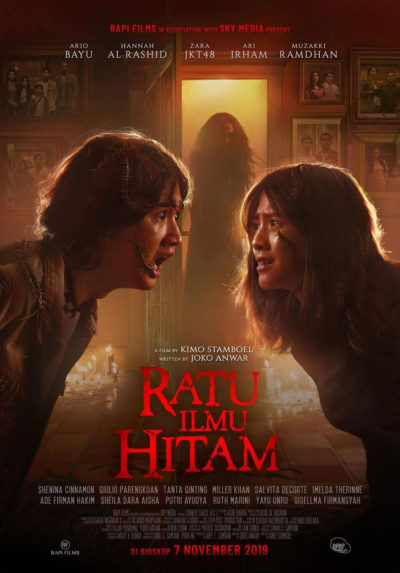 It’s a remake of a 1981 film by the same name, and is about the return of Hanif (Bayu) to the orphanage where he grew up. He has made a good life for himself, with a wife, Nadya (Al Rashid), and three children, including the inquisitive and blunt Haqi (Ramdhan), who helps propel the narrative by asking the questions the audience wants answered. Hanif is going back, to pay his respects to the founder of the facility, who is now on his death-bed, and is joined by two other ex-residents and their families. Most of the current orphans are out on a bus trip, but it soon becomes clear that this place has a history. Haqi is told of a former worker who abducted a young girl, was walled up in a room, and bashed her own brains out. Things become increasingly murky from there, as the orphanage’s secrets are revealed. For while there is some truth to this legend, it’s far from the whole story.

In particular, there is a vengeful soul who is intent on wreaking revenge for wrongs (perceived or real), and doesn’t seem to care who gets in the way. Quite why the spirit waited so long is a bit unclear, but it’s clear they are now intent on making up for lost time. People’s fears get turned against them: for example, a woman who is concerned about her looks engages in some impromptu self-surgery (top). If you are squeamish about creepy-crawlies, you should likely stay away too, for centipedes and other critters scuttle in and out of places on the human body where they should not go.

It all escalates almost relentlessly, to the point that the bus full of orphans becomes little more than an afterthought. The film might have benefited from a more well-defined protagonist; the second half does become not much more than a procession of set pieces, with even decapitation proving barely an inconvenience. However, I can’t complain when said set pieces are well-staged, and brimming with gross imagination. The ultimate truth turns out to be even more twisted than I thought, and I was left feeling that the peeved spirit has a more than strong case, in terms of justifiable revenge.