And, so, it ends. Not with an apocalyptic bang, but a somewhat underwhelming whimper. While parts 1-3 may have steadily declined in quality, they did provide a complete, satisfying character arc for Christopher Walken’s Gabriel. The same cannot be said for 4-5, in regard to their lead character, Allison (Wuhrer). Though these were shot back-to-back in Romania, and should be considered a single narrative entity (even if this one runs barely 75 minutes, and that includes footage recycled from #4), it lacks a definitive conclusion. I suspect they were hoping for further installments, a goal which remains unfulfilled, 16 years later. Especially after its predecessor breathed unexpected new life into the franchise, this feels a disappointing way for things to end. 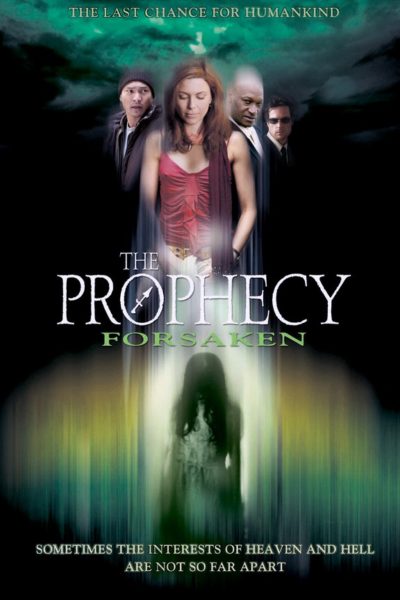 I will say, though: the casting remains on point. This time Todd and Lee join the team, both veterans of many a genre flick. Todd is especially well-suited for seraphim Stark, seeking the page from Allison’s self-writing Bible which identifies the newly-born Antichrist. His sonorous voice and presence give proceedings a weight which make it easy to believe this is Serious Business. Lee plays Stark’s assassin, Dylan, sent after Allison so the angel can keep his hands clean (I guess in this world, God knows when you masturbate, not when you kill someone). But he goes through several changes of heart and crises of conscience over the film. These are signified by Lee pulling an angst-ridden face. Yeah, drama is probably not the martial artist’s biggest strength, and there is surprisingly little ass-kicking for him to do, making his selection for the role an odd one.

After being so gung-ho about wanting the book last time, Satan (Light) seems curiously disinterested now. He sits on the sidelines, occasionally passing sardonic comment, and his rival from #4, Belial, is now Lord of Not Appearing in This Movie. If you get that reference, you’ll understand why I laughed out loud when the name of the Antichrist was finally revealed, because – I guess, spoiler? – it appears on first glance that the man going to bring about Armageddeon will be… Michael Palin? Turns out it was just an unfortunate choice of font. But it still allowed us to quote Monty Python for about the next five minutes (“He’s not the Antichrist, he’s a very naughty boy…”). So not a bad thing.

It all builds to a confrontation between Stark, Dylan and Allison on a roof-top above the city streets. Though it could well have lasted about an hour less, if Stark simply had chosen a sidekick slightly more committed to the cause. It ends in a way which feels like a side-story to another religious franchise – The Omen: The Romanian Orphan Years – and, as in the previous film, the local setting does lend a dark, mystic quality that the urban America of the first three couldn’t offer. But instead of ending either with the Book of Revelations brought to life, or averted, the ending here is ambivalent, and likely to satisfy nobody.