All the pieces were in place for the fourth entry in the Prophecy franchise to be a disaster. Five years after the previous installment, with no Christopher Walken in view, a producer of the previous entries getting promoted to writer/director, and shot in Romania. Those are rarely good signs. So, get out the Crayolas and colour me Surprised Umber, for this actually ends up being decent. Again, we’re not talking Oscars, yet for a straight-to-video fourth entry, it was more than passably entertaining. The main factor in its success is going in a fresh direction: rather than a war in heaven, this is about a war in hell. between Satan and a renegade lieutenant, Belial, who wants to set up his own inferno. 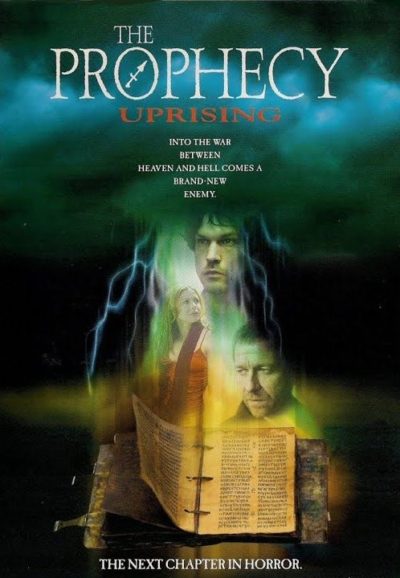 The format is, however, similar in that the factions are both after a MacGuffin, in this case a copy of the Bible to which new material is being mystically added. This includes the name of the Antichrist, which would give either demon a massive advantage in their struggle. It’s now in the hands of Allison (Wuhrer), a theology student who hears voices. Meanwhile, bad cop Dani Simionescu (Pertwee) has found himself assigned a new partner, Interpol agent John Riegert (Light). Turns out Dani and Allison have a connection, dating back to Communist days, and Belial is using his body-hopping skills to get closer to his target, ending up in the body of another local cop, Laurel (Bradley, his head unrecognizably pin-free).

As well as a switch from heaven to hell, the “talking monkeys” are given rather more back-story than in previous installments, and that works to the film’s overall benefit. While Walken is always going to be missed, I like Pertwee as an actor. He’s as good value as usual here, even if his strongly English accented Romanian cop is excused rather than explained. Light seems to be doing a low-rent impression of Benedict Cumberbatch, and is just off-kilter enough to be provocatively intriguing. The laissez faire approach taken by God/Jesus also makes more sense here, given we’re dealing with an internal power struggle in their enemy’s territory. However, Wuhrer doesn’t get that much to do, and the angelic voices in her head aren’t developed enough: they’re more a convenient plot device.

It is probably better to treat this as a separate, stand-alone entity – or at least something which inhabits the same Prophecy universe, rather than being a direct successor to parts 1-3. If you can stop looking for Chris W to pop up out of every corner, and treat this as its own creature, you are considerably more likely to get something out of it. It definitely did a better job of holding my attention than either II or III. For whatever reason, I was getting a Warlock vibe at some points, perhaps in its admirably dead-pan approach to events which, in many ways, are frankly ridiculous. I am genuinely interested in seeing how the series finishes.