This is the second feature from the son of David Cronenberg; for some reason, I didn’t see his debut, 2012’s Antiviral. This one appears to indicate the apple hasn’t fallen far from the tree, playing a little bit like Scanners, a little bit like Videodrome. Which may be why, perhaps, I didn’t feel like this had an enormous amount of impact – certainly nothing as much a wallop as Dad’s best efforts. It begins, playing almost like a follow-up to Videodrome, with a club hostess going up to a customer, stabbing him repeatedly, and then attempting to kill herself, before eventually succumbing to ‘suicide by cop’. 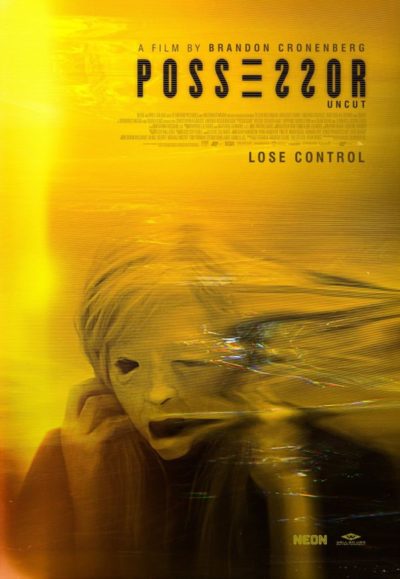 Turns out, this is part of a high-end assassination business. Tasya Vos (Riseborough, apparently due to the unavailability of Tilda Swinton) is the company’s top killer. She is ‘injected’ into the body of a patsy, and controls them for the next couple of days, up to and including the murder of the target in question. But it’s a bit of a fraught process, requiring careful counselling from her handler, Girder (Leigh, who memorably worked with Cronenberg Sr. on eXistenZ) to ensure Tasya doesn’t retain any of her host’s personality. Her next task involves invading Colin (Abbott), with the aim of killing his girlfriend, Ava (Middleton) and her millionaire businessman father (Sean Bean). However, getting into Colin’s mind proves considerably more difficult than getting out, and there’s a real possibility Tasya could be the one who ends up losing their mind.

While it’s all somewhat interesting, there just didn’t feel like there was enough going on here. Contrast, say, Videodrome, where it seemed as if every single scene was peeling back another layer from the onion, revealing something thought-provoking and/or relevant to the unfolding conspiracy. Here, I was given little or no sense of a larger world at play, beyond Colin’s tedious day-job of spying on people through their webcams and commenting on their interior decor. Even the central concept seems an unnecessarily complex means to an obvious end, which could be achieved just as effectively with a car-bomb, albeit with a few more loose ends, admittedly. I guess high-end services for high-end people, perhaps?

What Cronenberg Minor does nail, is much the same chilly aesthetic in which his father specialized. Neither Tasya nor Tasya-as-Colin are sympathetic people; there’s an attempt to give her something of a background, with an ex-husband and son from whom she is separated, yet still has feelings. However, this never manages to reach the level of more than a token gesture. Again, compare Tasya Vos to Max Renn in Videodrome. While the latter certainly came over as a sleazeball, unpleasant in many ways, he was still a fully-rounded character, something Tasya falls significantly short of achieving. Still, when you consider David Cronenberg’s second feature was the near-unwatchable Crimes of the Future, it would obviously be premature to write off Brandon, and there is certainly potential here worth monitoring.