A father and daughter are brutally murdered in their home, and the apparent perpetrator, Dean McCallum (Lyall), walks into a nearby restaurant still drenched in the couple’s blood. Tasked with interviewing the man are detectives Jared Lamb (Stillman) and Reina Herrera (DeLany), but it soon becomes apparent that this is no ordinary suspect. McCallum’s history and reputation shows no indication at all that he’d be capable of brutal slaughter – and that’s only the beginning of the weirdness. He shows a staggering amount of knowledge about… well, everything, not least the personal histories of Lamb and Herrera. He also claims to be only occupying McCallum’s body as a vessel. Initially, the suspicion is some kind of dissociative personality disorder, but psychiatric evaluation determines him utterly sane, as well as freaking the assessing psychiatrist out when he knows far more than he should about her as well. So is he a demon? An angel? Satan? Or God himself? And what does he want? 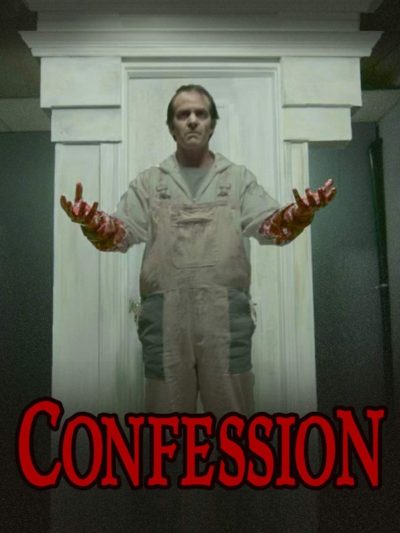 At 119 minutes long, it certainly doesn’t hold back, with some intriguing concepts, and definitely offers a fresh take on the “religious killer” theme. It is very dialogue heavy, and as such, stands or falls mostly on the strength of the performances. I think Stillman came off best, playing a complicated character with his fair share of emotional baggage. I was a bit less impressed by Lyall, who never quite seemed to have the presence you’d expect given McCallum’s situation, and comes over as too low-key. On the other hand, Nyiri is great at generating unsettling atmosphere in spades, with imagery such as someone tapping a hammer on the ground, which achieves an impact considerably above what any description would suggest. The look of the film is generally polished, helped by Steve McAllister’s effective soundtrack, and Nyiri’s background as a theatrical set designer. While I’m not sure what the budget was, I certainly didn’t find myself thinking about it during the film.

I’m not quite so convinced about the finale, which seems to go thoroughly off the 10-metre diving-board, in a way which felt more like the ending of 2001, A Space Odyssey than I’m comfortable with. [I hated the ending of 2001] It almost seemed as if Nyiri couldn’t figure out how to tie up the loose ends in a logical manner, and opted simply to say, “Fuck it.” Whether this was brave or foolish is very much going to be a matter of opinion. I was kinda disappointed by this aspect; maybe I needed to be on stronger drugs than my current regimen of DayQuil to appreciate it? However, this is still a good example of what indie film-makers should aim to do: take risks, in both themes and approach. This doesn’t shy away from some awkward questions about both religion and faith – even if the answers it offers may not be what the devout want to hear. As a first feature, it’s definitely better than most.