If ever there was a feature film for which the phrase, “This would have made a great short”, was intended, here it is. You get roughly 15 minutes of somewhat amusing content, spread like budget margarine over an hour and a half. If you want to watch Cage mopping floors, playing pinball and occasionally beating up creepy looking animatronic figures in a kiddie restaurant, all without saying a single word, this is the movie for you. Not exactly my cup of tea, it has to be said. Cage plays a nameless drifter, who ends up stuck in a small town, needing money to get his car repaired. To that end, he agrees to barter a night of clean-up in Willie’s Wonderland, an abandoned party venue. However, it turns out the figures therein are possessed by the souls of a group of child killers, and the town has quietly agreed to offer up an occasional outsider to them, in lieu of any locals. 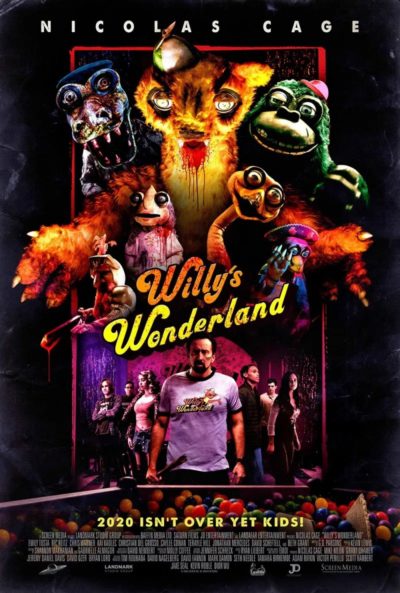 That’s basically it. The makers seems to realize they haven’t got enough here for a feature. So they throw in a group of unnecessary teenagers with arson on their mind, led by Liv (Tosta), and the local sheriff (Grant), because otherwise you haven’t got much more than ninety minutes of household chores. After all, someone has to suffer death by animatronic, and you know it sure as shit isn’t going to be Mr. Cage. So wheel on the generic young people of no discernible character, to behave insanely stupidly, like have sex in the worst possible place, and suffer the obvious penalty for their idiocy. This is simply bad, cliched horror, and putting them next to a silent Nicolas Cage does not alter that fact in the slightest. Nor does the concept being a more or less shameless knockoff of indie video-game franchise, Five Nights at Freddy’s. Despite the paper-thin and feeble script, if this has delivered on the concept with any degree of energy or enthusiasm, it might still have pulled this off.

Instead, however, it is little more than blandly repetitive, with little or no sense of escalation as we go through proceedings. I do grant you, the puppets do have a certain sense of creepiness, in particular the moth-eaten Willie Weasel who leads the entourage. However, you never get the sense of them posing any real threat to Cage’s character, in part because he is so incredibly blase about the whole proceeding. If they’d backstoried it that he knew what he was getting into – I dunno, made his sister a previous victim, for example – his complete lack of surprise could have made sense. Instead, it’s just another way in which the writing comes off as formulaic and lazy, doing no more than the bare minimum, while leaving almost all the potential unexplored. This seems to be getting a cult following, which seems inexplicable to me, unless you’re a member of the Church of Almost Entirely Underwhelming.