After she’d successfully predicted an event here – someone’s blood dropping on a corpse in a morgue – Chris turned to me and said, “We should be writing these movies.” The only problem is, I’m not convinced anyone actually wrote this, so much as assembled it. Even the title appears to have been generated through a round of Mad Libs: “The <traumatic experience> of <woman’s name>.” From, it appears, the same people who brought you The Exorcism of Emily Rose or the far superior “horror movie set in a morgue with a creepy corpse” entry, The Autopsy of Jane Doe. Coming soon: The Mammogram of Summer Fitzpatrick [tip of the Film Blitz hat to name-generator.org.uk for Ms. Fitzpatrick] 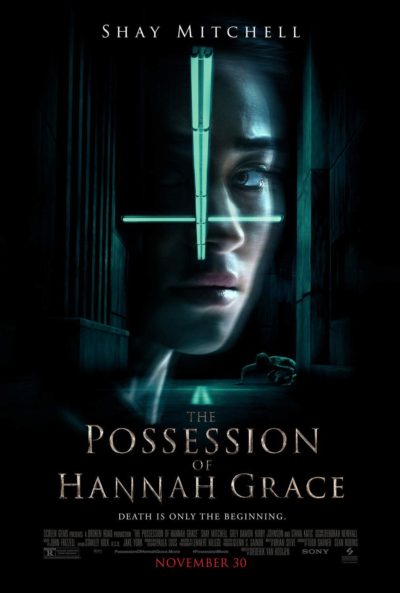 The heroine here is Megan Reed (Mitchell), who comes with so much baggage she could open a Louis Vuitton store. A former cop, she had a meltdown after an incident which got her partner killed, and sunk into substance abuse. She’s now clean and sober, but has just broken up with her boyfriend. So what better job for such an emotionally troubled and fragile person, than night attendant at a very poorly-lit hospital morgue, checking in corpses? [There’s some guff about it keeping her out of overnight trouble; like no other, far less problematic jobs exist after 1o pm]. One such is Hannah (Johnson), a murder victim whom we know was the subject of an exorcism, and is pursued by her father (Herthum), who believes the dead body is still possessed and must be burned.

Things unfold exactly as you’d expect. The weirdness begins as soon as Hannah hits the slab, with morgue equipment misfiring. It escalates from there, with minor characters being offed and Hannah never doing the sensible thing and getting a job on the graveyard shift at 7-11 instead. As well as the illumination issue, this morgue appears to possess remarkably lax security, with people wandering in and out, as necessary to the plot. Hannah is no less problematic, possessed of great power which allows her to hurl people through the air, but unable to open a door and leave the premises. And naturally, despite offing people with enthusiasm, Hannah leaves the very convenient Megan alone until the end. Though I wouldn’t want to hang out with whiny Megan either, so fair enough.

All of which could be forgivable, had Van Rooijen been able to generate either atmosphere or decent scares. He doesn’t. I think perhaps opening with the exorcism, and signalling the cause in the film’s title, were both mistakes, robbing the concept of any surprises. Leaving it vague, and letting the audience sweat it out until Mr. Exposition shows up, might have helped generate tension which the movie badly needs. Instead, all it can manage is some occasional creepiness – the sound design isn’t bad, especially Hannah’s movements – and that’s not nearly enough to overcome a slew of problems in other departments. Possessed, but not impressed.