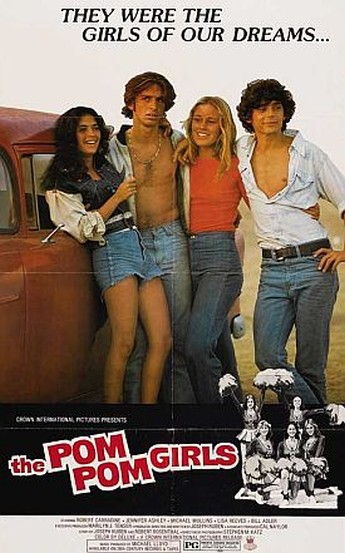 Maybe this would be more interesting if a) I’d gone to an American high-school, and b) wasn’t at least twice the age of the target audience. As is, all its talk of pep-rallies, homecoming games and cheerleaders left me cold: the educational establishment I attended in Northern Scotland had none of these. Everything I know about high-school, I learned from Buffy, so I was sadly disappointed by the lack of demons, vampires, butt-kicking and Eliza Dushku here. Instead, it’s very pedestrian stuff, as Johnnie (Carradine), Laurie (Ashley) and their pals make their way through the last year before graduation. The guys are on the football team, the girls are the titular supporters on the sidelines, and…nothing much happens, beyond the usual high-school teen drama. They bicker with each other, feud with a rival high-school team (this was an era where, apparently, stealing a fire-truck was seen as a youthful prank, not a terrorist attack), throw food at each other and so on. The only fragment of anything approaching real drama is at the end, where Jesse (Mullins) engages with another student in a game of “suicide chicken” – it’s like regular chicken, only both drivers speed towards a cliff-edge and the last to stop, wins.

Very much a product of its times and environment, nobody ever suffers any consequence for their actions – which may appeal to the young, but quickly gets irritating to anyone old enough to know better. This kind of barely assembled, “slice of life” drive-in cinema can work, when done right, as with Van Nuys Blvd. It just doesn’t here. Even the brief, supporting presence of sexploitation icon Rainbeaux Smith (once described by Quentin Tarantino as being to cheerleader movies “what Bruce Lee was to kung-fu movies”), and a surprising turn from James Gammon as the football coach, provoke mere blips on the flatline which rapidly became my interest. Perhaps this is one of the cases where “you had to be there,” i.e. both at high-school, and in the mid-70’s, to appreciate the characters and incidents portrayed there. For those like myself who fall outside the era, location, culture and, at the time personally, continent which it portrays, this is nowhere near as entertaining as it thinks.