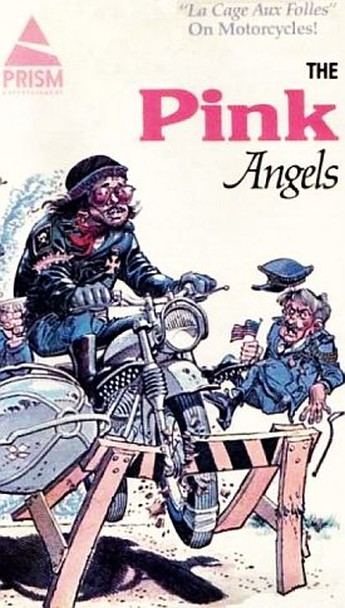 If not the worst film ever, it’s certainly a candidate. It only dodges the dreaded, rarely-given “F”, by virtue of at least being different, though if ever you needed proof this isn’t necessarily a good thing, look no further. I’m not sure any other movies have centered on a group of gay bikers. I’m still trying to work out if the results are empowering or extraordinarily homophobic: the portrayals here are such shrieking stereotypes, I’m leaning towards the latter. The six are on the road, heading to a Los Angeles drag convention, a road-trip which brings them into conflict with just about the entire rest of society: cops, bikers of the non-flamboyant kind and a general (Marshall) who appears ripped-off from Graham Chapman’s army figure in Monty Python. I kept expecting him to stop the movie for being “too silly.” It’d have been a blessed relief if he had, though the ending actually delivered is almost as much of a non sequitur.

I’m also reminded of Python by the cross-dressing here, which fools characters such as the straight bikers, despite being utterly unconvincing [I also note the script naturally equates homosexuality and transvestism]. The same Python episode which introduced the Colonel, two years prior to Pink Angels, also had Hell’s Grannies, and this feels like the sketch, stretched out to 80 minutes for no reason at all. Add one of the gang who’s a bad John Lennon impersonator, and the British influence is clear. I can only apologize. For there is precious little content here, once you’ve stripped the interminable road sequences, backed by horrendous songs, and – oh, hold my aching sides – an endless parade of scenes where various members of the Pink Angels interact with normal society [I should mention, one of whom is Dan Grizzly Adams Haggerty]. And then, the final shot makes an abrupt right-turn which I can only presume was spliced on by the distributor, in a desperate attempt to forestall the drive-in riot which would otherwise likely have ensued. Sadly, by that point, I’d already slashed my sofa and set fire to our living-room.