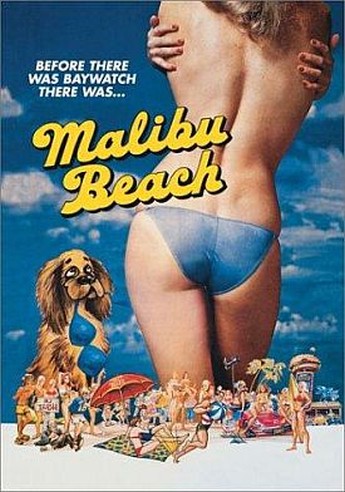 An important sub-genre of Crown International movies was the teenage flick. This abandoned anything resembling the traditional three-act structure, in favour of a loosely-linked series of escapades, tied together through their location and a range of central characters. Here, it’s one summer when Bobby (Daughton), new lifeguard Dina (Lankford) and their friends hang out on the titular strip of sand, fall in love, get into scrapes [though, as in The Pom Pom Girls, the definition of ‘youthful pranks’ was clearly a lot looser in those days!] Also getting screen time are a rookie cop who develops a fondness for dope, the local bully (Oliver, reprising a character he played in another CIP movie, The Van) and an apparently stray dog with a fondness for grabbing swimwear and running off with them. Curiously, the canine only ever steals those belonging to attractive young women. What are the odds of that? About the same as Dina wearing a bikini on duty, even though that is strictly against life-guard policy.

It’s kinda hard to write about this kind of movie, since they might as well be taking place on planet Tharg and depicting the life-cycle of the Nujsahk aliens. While I did spend my summer of ’78 on the beach, I doubt that the Moray Firth coast in N. Scotland had anything in common with Malibu, except a proximity to water. That said, this is a harmless time-passer, with the leads less painful to watch than many of their kind, and the supporting characters add to the light-hearted and extremely easy-going ambience. Bear in mind, when this came out, British youth was embracing punk, with its entirely different vibes: here, anarchy is something that extends no further than sneaking into your girlfriend’s house when her parents are out. The film did generate a vague nostalgia for hedonistic summers where anything could happen – though in my case, never did. However, it’s a quintessential drive-in flick, in that there’s very little here that will stick in the mind once the credits roll.