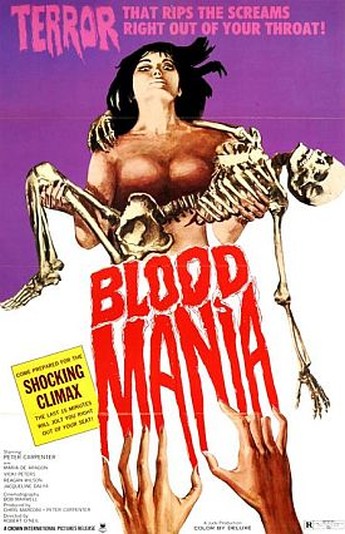 I enjoyed this psycho soap-opera more than expected: if nothing else, there’s certainly plenty going on. The unstable Victoria (De Aragon) has set her cap at Dr. Cooper (Carpenter), her father’s physician, but he is being blackmailed for fifty grand due to his previous life as an abortionist, Roe vs. Wade still being about three years off. Vickie decides to off her daddy and his weak heart, so she can “help” Cooper with his problem, but unfortunately, failed to check the will – turns out her sister, Gail (Peters), is the main beneficiary. Cooper switches his affections to Gail, taking her, among other places, to the Renaissance Fayre. What woman could possibly resist? It’s a decision that does not sit well with Victoria, whose sanity was, as noted, already skating on thin ice. Then there’s Gail’s strangely-bohemian female companion, and the creepy nurse (Simms) who tended the victim during what turned out to be his last days. What’s her interest, and why is she still hanging around, after her charge is no longer breathing?

The script – co-written by Carpenter – does a good job of keeping all these angles coming at the viewer. Once you get past a needlessly-psychedelic opening sequence, it’s closest cousin is the Hammer psychodramas of the mid-sixties, though this has rather more breasts; I think most of the female characters shed their tops at one point or another. Hey, it’s drive-in. But if Carpenter’s hand in the script is laudable, his performance most definitely is not: wooden, unconvincing and a good deal less interesting than even the costumes chosen by Ms. De Aragorn, who is as much nympho as psycho, and so predatory, she even chases away the pool guy. My favourite was likely her white dress, which for a time had me wondering how the hell she got into it. Was it painted on? The tagline on the poster (right) can be found in the dictionary beside “setting unrealistic expectations,” for there’s nothing here remotely likely to rip anything from anywhere. Still, I won’t deny, the boobs help, and as a brisk timepasser, it’s okay.