Who knew sex ‘n’ violence could be so… dull? If you’ve seen the trailer, you’ve seen all the good bits, not least when “retired” assassin Duncan Vizla (Mikkelsen) kicks off his array of machine-guns, remotely targeted through sensors on his fingers. That, shown above, was the money shot which got us to watch the entire movie. Trust me, there’s little even remotely close to approaching it, in terms of inventive mayhem. The result is instead a waste of a good cast. We’ve previously fallen for Winnick as Vikings matriarch Lagertha. Here, she has a striking array of wigs in lieu of an actual character. 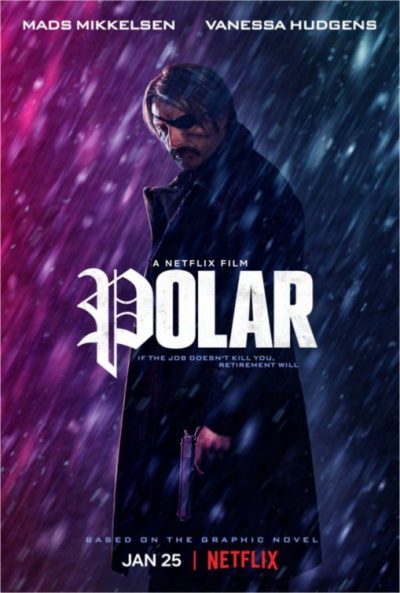 Vizla is, as noted, trying to retire, after a long and successful career as a hitman called the ‘Black Kaiser’. The problem is, by agreement with his employer, Mr. Blut (Lucas), Vizla is due a payout of eight million dollars when that happens. One caveat: he must be alive. The result is obvious. Blut sends a slew of other killers after his employee, to ensure Vizla can’t collect. However, it’s as if the film is doubtful of its ability to make this simple premise last the length of a feature. For there’s another sub-plot where he meets and befriends Camille (Hudgens), a young woman who lives in the house next door to his retirement pad. It feels like two different movies, not-so-subtly blended into one.

Based on a comic-book, that perhaps goes some way to explaining the slight nature of the plotting, with the motley gang of assassins also feeling like a cosplay version of the Suicide Squad. Which might have worked, if Winnick had been allowed to go full Margot Robbie, instead of being consigned to a minor support role as Blut’s secretary or something. Instead, that role is given to Ruby O. Fee, who has to pay dearly for the part, enduring a sex scene with Mikkelsen, who is more than three decades her senior. Was it worth it, Ruby? WAS IT WORTH IT?

Åkerlund’s background is in music videos, probably most famously Madonna’s Ray of Light. And you can tell, for the approach here is very much style over substance. We see this right from the get-go, where Johnny Knoxville plays the first victim – apparently, though I certainly didn’t realize through exposition, another wannabe retiree. It’s not awful at the time. It’s only as you get deeper into the movie, you gradually realize it has very little else to offer. And very little to offer at unnecessary length, too; since, thanks to scenes like a particularly pointless show-and-tell at a local school (!), this runs an inexplicable 118 minutes. It needs to be 85. When Vizla is captured and suffers four days of torture at the hands of Blut, it feels like this sequence is unfolding in real time. You certainly empathize with the victim – in the sense that having an eye gouged out would potentially be preferable to having to keep watching the movie.