After Versus, Azumi and Godzilla: Final Wars, Kitamura had as good a track record as almost any genre director. Since then, it’s been a little more flaky, with his move to the West resulting in the merely okay, Midnight Meat Train. Now, there’s this, which manages to swing wildly about from awesome to soporific. It doesn’t hang around, that’s for sure. It starts with a car containing six passengers immediately suffering a blowout on a remote road. While they are changing the tyre, it becomes apparent this was no accident, and a sniper hidden in a nearby copse of trees begins taking out the passengers. 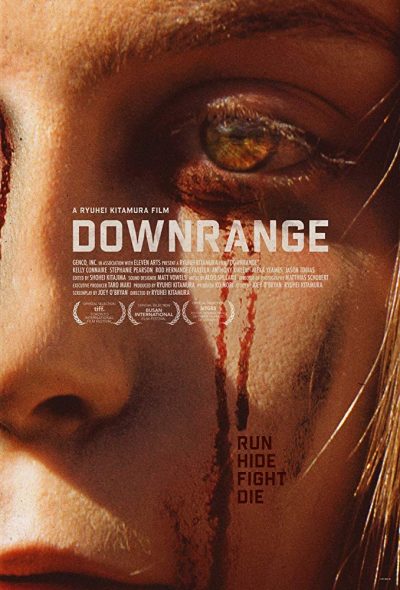 That’s it in terms of plot, with survival being the sole motivation. The lack of lead-up means all characterization is achieved through action. So there’s Jodi (Connaire), the fragile one; Keren (Pearson), the self-professed “army brat” from a hunting family; Eric (Kirlew), the slightly hysterical black kid, separated from the others due to an unfortunately-timed pee break; and Todd (Hernandez), the driver, who tries to take charge… and, naturally, is ill-equipped to do so. There are no surprises as to who makes it to the end: Chris nailed it, 30 seconds after the blow-out. It’s the getting there which is the fun, though the ending is a nice subversion of the horror trope where the bogeyman is presumed to be dead, just because they’re lying down.

Everyone here dies hard. Even if you get shot through the head, you don’t go down immediately. You stagger around, in order to generate maximum horrified reactions from your friends, before the inevitable double-, triple- or quintuple-tap. That’s when Kitamura isn’t pulling off bravura moments like having the camera go through someone’s skull. The sound effects are no less enthusiastic, though I question some of the physics. You see the flash of a gun at the same time as you hear the shot, and with high-powered rifle rounds exiting the barrel at a speed in excess of Mach 2, the bullet should arrive before the sound, not after, as depicted here.

A bigger problem is the stuff between the mayhem. As mentioned, the victims are never more than sketches, and while the lack of faffing around is admirable, you’re never given any real reason to care, beyond that victimhood. So when Todd goes off on a rambling monologue about… something, I literally dozed off for a few minutes. The attacker is even more enigmatic, their face never seen, and their motivation entirely opaque. This pure, wrong place at the wrong time randomness is presumably intended to be chilling, in the same way “Because you were home” was in The Strangers. It isn’t.

All told, this works rather better as a technical exercise than a horror movie. While it’s a great high-concept, and occasionally lives up to that, this is almost entirely unaffecting. For all its enthusiastic and imaginative splatter, it’s considerably less human than the director’s entry to the Godzilla franchise.