I hated Bohemian Rhapsody with a passion when it was first released in 1975. Admittedly, I was nine at the time, so my musical tastes were rather unformed, to say the least. I’m not sure why, It was probably because my sister loved the song – so, as part of my little brother responsibilities, I was contractually obliged to hate it, along with the rest of her musical tastes. Those two months it was #1 in the charts, were the longest of my young life. I’m now prepared to admit I was wrong about Rhapsody. Though it turns out, my 9-year-old self was dead right about Genesis sucking. Who knew?

Anyway, I’m not sure at what point Queen migrated to the respect side of my affections. It might have been around the Highlander soundtrack. It might have been Live Aid. But the net result is that not having seen the band play, in their prime, remains a source of nostalgic loss. In the lead-up to seeing this, I watched the Queen at Wembley concert, and there’s no doubt: Freddie Mercury was an incredible showman and performer. Based on this film, however, he was also an almost unbearable asshole. 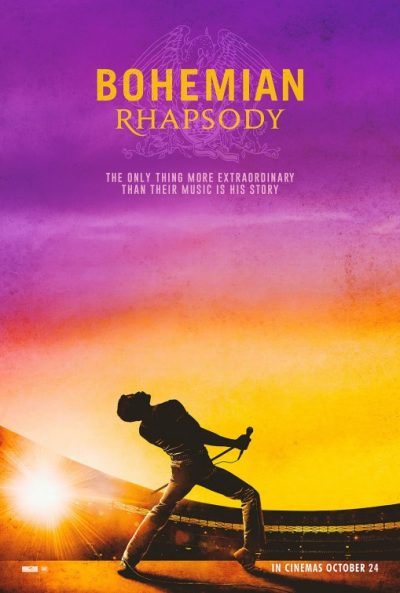 Key phrase: based on this film. Because, as with any biopic – especially where the subject is dead – there’s no guarantee of accuracy. When truth and cinematic need collide, there’s only ever one winner (exactly as it should be, unless you’re making a documentary). Certainly, the film plays fast and loose with a number of facts, purely for the sake of drama. The band didn’t split up before Live Aid, for instance [they played together just eight weeks earlier], and it’s generally agreed Mercury had no idea he was HIV-positive at that point. Still, with the payoff being a glorious recreation of that Live Aid show, it would be churlish to argue with the set-up.

The other complaint I read was about it glossing over Mercury’s sexuality. Uh, no. I don’t think I’ve seen a gayer PG-13 film, or one with a gayer lead character make $800 million worldwide [unless you maybe include J.K. Rowling ret-conning her own work after all the books were out, to make Dumbledore homosexual. Here’s a clue: if it didn’t matter enough for you to mention it anywhere in four thousand plus pages… it still doesn’t matter] I’m not quite sure what its critics were wanting to see, short of Rami Malek sucking actual dick. It was certainly gay enough for me.

Malek was excellent, embodying the complex nature of a man who was both supremely self-confident to the point of arrogance and (again, based on this film) simultaneously suffering from low self-esteem. That opened him up to exploitation by the hangers-on and leeches that fame inevitably brings. It’s at its most affecting in the later stages, where Mercury comes to terms with himself and achieves inner peace. To that point, he has managed to rub just about everyone the wrong way, in a way more grating than endearing. Though amusing to see Mike Myers play a record company executive who thinks Rhapsody is a terrible choice of single. [Myers, of course, was partly responsible for the song’s nineties renaissance after using it in Wayne’s World]

Its reasonable success is all the more remarkable, considering that Singer was fired during production. Explanations vary. Either he wanted time off to care for a sick relative, or he was throwing things at Malek. Subsequent allegations of sexual misconduct against the director haven’t helped. Me, I’m just gobsmacked the film ended up being directed by one member of the cast of Lock, Stock and Two Smoking Barrels. What a pity it wasn’t Vinnie Jones. Maybe they’re saving him for the Abba biopic.