This strange little slice of German exploitation is an odd combination: seventy minutes of teenage moping, followed by twenty of naked dismemberment and cannibalism. I can’t help feeling it would be improved if those ratios had been swapped. Simone (Nosbusch) is an alienated 16-year-old, completely obsessed with mysterious New Wave singer “R” (Steigert). She writes him frequent letters, without ever getting a reply, and her poor parents (Vischer and Tölle) have no clue how to handle her. Simone ends up following R to his appearance at a television studio, but when she actually gets some face-time with him, is completely tongue-tied, and can’t say a word. However, her subsequent fainting gives Simone a second chance – and this time, she’s not going to let go. Ever. Again. 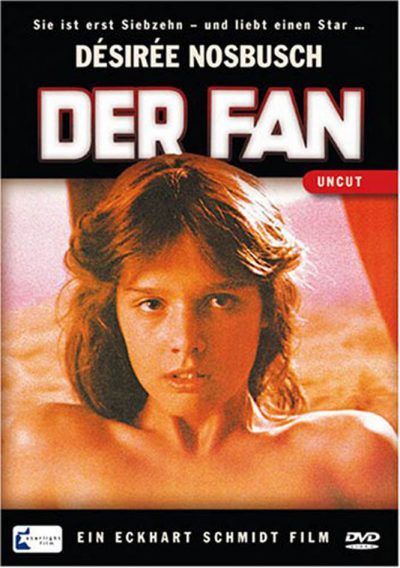 According to the director, this is actually a metaphor for the Third Reich, with Simone the German people, and R being Adolf Hitler. Okay. If so, I would have expected R to be rather more darkly charismatic, so as to make Simone’s infatuation with him slightly more plausible. As is, he’s a bland Teutonic cross between Rick Astley and Falco, with all the charisma of (looks wildly around house for suitable metaphor) a bag of used cat-litter. However, who knows the ways the mind works in teenage girls? The other problem is that it’s so painfully obvious Simone is a couple of bratwurst short of a mittagessen. You’re just waiting for that insanity to show up, with the only question being its form. If you guessed “cutting the subject of her devotion up with an electric carving knife after whacking him on the head with a statue,” give yourself two points.

It’s not entirely without merit though, even if it provides the cleanest and most bloodless dismemberment in cinematic history. There’s a poignancy to some moments, such as the close-up shot of Simone’s face as she goes about her work, a single tear running down her cheek. It is also undeniably creepy as things progress, not least because Nosbusch – who’d go on to be the presenter of the Eurovision Song Contest just a couple of years later – was sixteen at the time of filming. Which makes her full-frontal nudity all the more uncomfortable to watch, as well as the fairly explicit sex scene with Schweiger, who was virtually twice her age.

In the end though, it’s just too chilly to be effective. This is supposed to be a crime of passion, and there’s very little of the needed intense emotions to be experienced here. About the closest it gets is when Simone tells R, “I thought you needed me!” and he replies, “I certainly did.” Ouch. It it cold in here? Schmid would go on to achieve success in the documentary field, and this makes sense, since the feature here demonstrates a dispassionate and almost clinical eye for its topic. Is it stereotyping to say this feels a very Teutonic approach to the subject? Curious to note it was released almost 20 years before the most infamous example of German cannibalism: I wonder if Armin Meiwes was a fan of Der Fan?