When this originally came out, the zombie genre was still clawing its way back out of the grave: the release of Planet Terror came closer to the Dawn of the Dead remake than the debut of The Walking Dead, and subsequent attainment of Peak Zombie. [Though Rodriguez was not as ahead of the curve as he would have been when the idea originally came to him, during filming of The Faculty in 1998.] And you know what? Despite this now being a world where we’ve had World War Z, iZombie, Cockneys vs. Zombies and even Pride + Prejudice + Zombies, his take still holds up well, thanks to its copious energy and imagination. 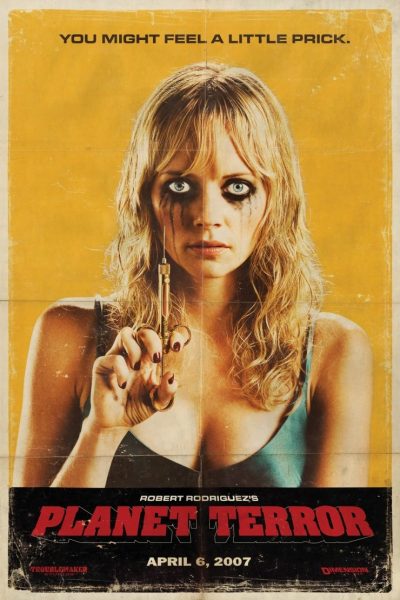 The plot is, admittedly, simplistic: military experiment goes wrong in small Texas town. Motley group of locals band together to fend off the infected hordes. Yes: they’re technically not “zombies”. But it walks like a Z, groans like a Z, and gnaws on human flesh like a Z… Copious blood-spatter ensues. It’s not a significantly different story from those we’ve seen before or since. However, how many of them have a pissed-off , sorry, go-go dancer, with a machine gun replacing her leg from the knee down? It’s a concept audacious in its idiocy, but since everyone buys into it – not least Ross McGowan, playing said go-go dancer, Cherry Darling – the audience is dragged along for the ride.

[Quick aside: whatever happened to McGowan? There was a point, right about the release of this, that she seemed on the cusp of stardom. Then… she vanished. Some Googling suggests a streak of bad luck with projects that got stuck in development hell for one reason or another, including other work with then-partner Rodriguez, such as remakes of Barbarella and Red Sonja. She was last heard of in October, stating she was raped by a certain studio exec – while no reputable publication has named names, the replies to her Tweet should slake curiosity about who she apparently means.]

Back in the world of the zombie apocalypse, McGowan gets good support from Freddy Rodriguez as her ex-boyfriend, El Wray, a man with a murky past, which seems to make him well-suited to survive. There’s also unhappily married medical couple Dr. William Block (Brolin) and his anesthesiologist wife, Dakota (Shelton), who are having relationship difficulties, to put it mildly. If you’re familiar with other films from the Rodriguez-Tarantino axis, you’ll recognize others, including Bruce Willis, Michael Parks, Tom Savini and Tarantino himself, in supporting roles. It’s a fun cast to watch, and they all attack the material with enthusiasm, though QT still can’t act his way out of a paper bag. Heck, even Fergie from the Black-Eyed Peas, who plays Dakota’s lesbian lover, does better than you might expect. [Fun fact: her feature debut was alongside Paul Walker in Monster in the Closet]

The effects work has stood the test of time very well. The practical work was by the renowned firm of KNB, who now handle the same task on The Walking Dead, and are gloriously messy. But perhaps surprisingly, much of the CGI, from Rodriguez’s in-house company of Troublemaker Digital, still looks good – quite a feat, in a field where just a couple of years can be an aeon in technological advancement. You’ll believe that Cherry not only loses her own leg, but also that it’s replaced, first with one taken from a table, then with a fully-functioning automatic weapon. Perhaps less successful is the digital aging: while amusing the first few times you notice it, this loses all novelty a long time before the end. We get the point, okay?

In the main, however, this is a thoroughly entertaining romp, that manages to strike a good balance, paying homage to the past, without living in it. This is easily as good as any of the films that inspired Rodriguez.